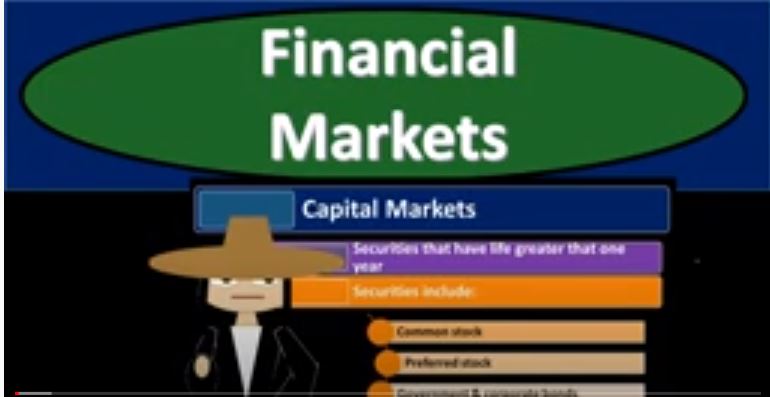 So typically, competition will be good in terms of providing more information about the value of items, financial markets can help report ethical or unethical behavior that may influence the value of the company. So when we have a market, especially if we have some regulations within the market, so that the information that’s being provided is somewhat standardized, it’s more likely that you will find problems than if you were not having a market. If there’s more restrictions, less people that would be then involved, usually unethical behavior, oftentimes, when you’re thinking about a market or an exchange, or some type of negotiation, what’s going to be underlying negotiations, it’s usually trust, right, there’s got to be some form of trust.

So the performance of the actual financial statements themselves, the main Performance Document, being the income statement, is going to be a primary tool on which management will kind of Judge themselves and judge their performance. But the ultimate Judge of performance on management is, you know, what are your stocks trading for what does the market think about about the company, and that’s going to be reflected typically in the changes in in the stock price. So and you can’t read too much into that, obviously, management needs to consider, you know, inflation, or increases or decreases in perceptions and whatnot, and think about the long term goal as opposed to the short term goal. But that feedback from the market is important for for management’s in assessing their performance. So return and risk, investors will choose risk levels that are in alignment with their objectives attempting to maximize return for a given risk level. So when you think about this, from a from an investment perspective, you always, you’re always measuring the risk versus return.

So typically, if there’s a if there’s a higher possibility of a higher return, that typically is in alignment, or goes along with a higher risk that will be involved. And that and that may just be inherent in some types of companies. And that’s something that the market will take into consideration when they’re valuing stocks. So companies that are generating high priced securities, are able to raise new funds in money or capital markets at lower costs than their competitors. So note that if the company is perceived at a higher value by the market, and remember the market is the only thing that that’s the end result that really values anything a market, how much could you trade something for how much is it valued for on the market? How much could you get for it, if the value of the stocks are higher than if the company needs to generate capital, then then they can do so more easily than obviously a company that that valuation is less. So companies will generally be penalized for not performing competitively. And this hopefully kind of seems obvious, obvious, you have a market that’s the point of the market.

So the market is supposed to drive, drive the performance upward, be through competition. So now that you have the market, looking and valuing the stock, you have the information that needs to be transparent, so people can actually have the information on which they can value the stock Then the companies that perform better and therefore have a higher perceived value will do well and the companies that perform worse will do less well.