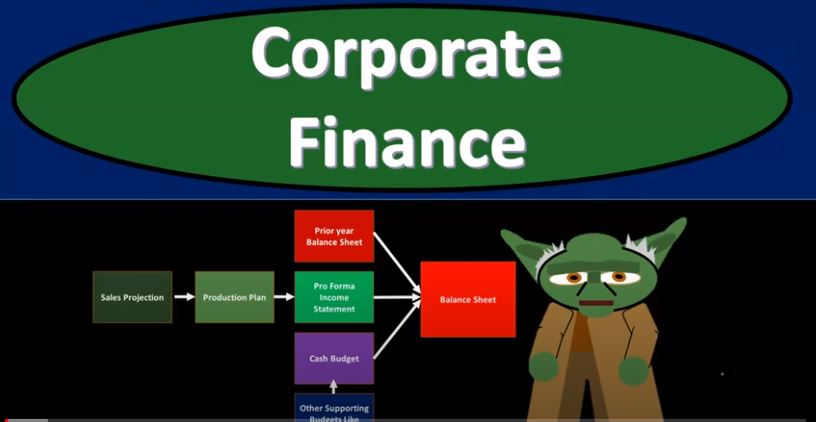 Corporate Finance PowerPoint presentation. In this presentation, we will discuss forecasting objectives Get ready, it’s time to take your chance with corporate finance, forecasting objectives. When thinking about forecasting, we’re thinking about into the future, we’re thinking about kind of like a budgeting or projection type of process, we want to plan ahead making changes in strategy as needed. So we’re going to think about what we think will happen into the future. So we can strategize now, and do what we need. Now, in order to accommodate what we believe will be happening in the future. Based on our best guesses based on our forecasts, we’re going to construct a financial plan to support the growth.

So we’re hoping that the growth is going to be in the future, we need a financial plan in place so that we can support that growth, a firm’s plans must take into account into account the risk taking desires of the people in charge. So when we’re thinking about a company, obviously, growth potential, or we’re thinking about what’s going to happen into the future, we have to take into consideration how much risk somebody wants to take on when pushing into the future we’ve discussed. And we will discuss a leveraged type of ratios, how we could finance growth, with debt or possibly equity financing. And whenever we’re making those types of decisions.

And whenever we’re thinking about something that’s going to happen in the future, which we don’t know what is going to happen, we have to be balancing out risk and reward oftentimes thinking about the idea that of course, the potential for greater reward, greater profits, comes along with greater risk, the ability to hedge against risk with sound planning. So whenever we’re thinking about risk, we don’t want to think about it and just say, Well, I’m gonna, I’m gonna just go for it and you know, take on a lot of risk, because I think there could be benefit with regards to that risk are related to it, even though risk and reward are kind of tied together with the decision making and to some degree, in other words, you know, the more profits that you might be able to accumulate in the future could come along with increased risks,

So if someone if a company was looking for a loan or something like that, then the bank or lender is going to want some plan into the future. What do you need this loan for? What do you predict that’s going to be happening in the future? And why that typically, we’ll start out with a Performa, or budgeted financial statements. So systems approach to developing a pro forma statements. So how would you put together than the budgeted financial statements, we can use a systems approach, which typically we’ll start with the creation of the income statement, because that’s going to be the performance statement. So if you think about how would you put together where you think you will be, and what your performance will be in the future, like a year out into the future? Well, you’re gonna you can think about the starting point of where you’re going to start. That’s the balance sheet as of now, right? The balance sheet as of now is where you are at, that’s where you stand. The income statement is how you did last year, right? So if you take about the balance sheet, now we can then think about, well, how far are we going to go?

So the first thing we need to do typically, what’s going to be our sales, how many we’re going to sell, then we can use that information for our production plan. If we’re if we’re making things to then calculate what we’re going to need in terms of materials, labor and overhead or for purchasing inventory. We can think about what purchasing needs to be for Our sales needs, and then we could we can construct the cash flow budget, which is going to be different from the income statement, which is on an accrual basis. So then we’re gonna have to take the income statement, kind of break it down into a cash flow statement, because obviously cash flow is going to be important as well. So we’re gonna have to take a cash flow statement, and then we can construct a pro forma balance sheet. Remember what the balance sheet is, is where we stand it as a point in time.

So after we got our performance statements, meaning how far did we go? How far did we drive in a mile in an hour? Like if we were driving a car, and we’re trying to see how far we got an hour, then we could take the balance sheet and then say, Okay, well, where did we start at? What was the odometer at at the beginning? What was the balance sheet at at the beginning? How far did we go income statement? Or how many miles did we drive in the hour? And then where do we stand at the end of the time period? Or what do we expect to be standing, that’s going to be the ending balance sheet that we’ll be putting together or the pro forma balance sheet. So it looks something like this, we’d say, okay, we’re going to start off, if we’re going to try to think about putting together our pro forma or projected financial statements in the future. First thing we got to do we have to do it in this order, we got to think about how many sales we’re going to have, right? If we don’t know how many sales we’re gonna have, we can’t have any idea of how far we’re gonna go.

We’re trying to estimate how many, like if we’re doing the miles thing here, again, how many? How many miles did we drive, we’re gonna have to know the sales in order to figure that out. So we need the sales projection first. And then we can do a production plan. So once we have the sales, if we make inventory, then we can put together the production plan, we need that we need the sales in order to know how much we need to produce. So if we’re gonna make inventory, we have the items, components of inventory being materials, labor and overhead. So now that we know what our sales are, we can start to figure out how much material we’re going to need labor and overhead for it, or if we’re purchasing inventory, if we sell inventory, we can then think about how much we’re going to we’re going to need to purchase basically that we’re going to resale on inventory for a retail type of company.

And then once we have that, we can put together the pro forma income statement, which is our performance statement, how far are we going to go? Now obviously, when we put together the pro forma income statement, we’re going to need more than just the sales and the and the the production plan, basically, the cost of goods sold, we’re going to need the other income items. But notice that the other income and expense items are usually more straightforward, because they’re not, they’re not going to be dependent on they’re not going to change with the sales volume. So when you’re looking at like selling an admin type of expenses, those are typically going to be similar from year to year, because they’re more fixed costs, oftentimes, like sales, salaries or administrative salaries are typically more fixed and whatnot.

So we’re going to need that and that’ll give us our cash budget that we’re going to be needed, then we also are going to have to take into consideration the prior year balance sheet so that we can then calculate the ending balance sheet. So our so this is where we ended, this is our ending point. So notice what we’re we’re starting with, we’re basically kind of if we’re doing our driving our car in an hour type of scenario, we’re basically thinking about let’s pretend the odometer is at zero, and just see how many miles we drove. That’s going to be the sales projection, the production plan, and the income statement to see how far we went, right how many miles we drove, then we’re going to be considering where we started the beginning balance what was the odometer at the beginning, so that we can then add to it you know, what, how far we went, so that we can then have our ending balance that is going to be our projected balance for the balance sheet at the end of the time period. So we’ll break this out in a little bit more detail as we as we go forward.