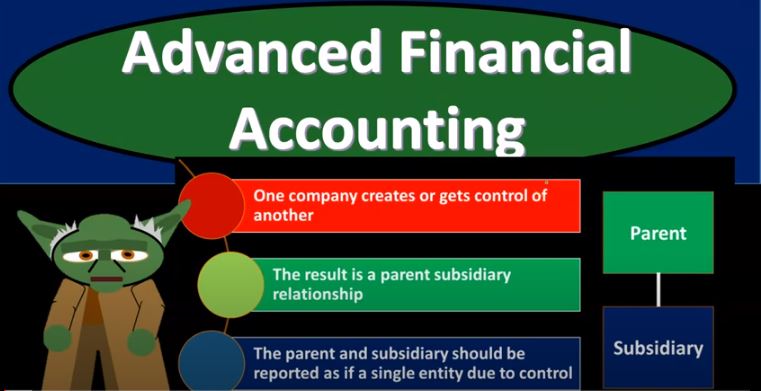 We got the parent subsidiary parent owning more than the 51% of subsidiary. So the parent and subsidiary it should be reported as if a single entity due to control. So why would you report these two separate companies? They’re two separate legal entities, right, which which typically, two separate legal entities would have two separate documents, financial statements, that would be reported, why would you then consolidate them? We’re going to consolidate them due to control. The parents, although they’re two separate legal entities has control over that, you know, the decision making process given they own over 51% of the subsidiaries and because they can exercise control Over the subsidiaries, although they’re two separate legal entities, the idea is that it would make sense to report them as one for the consolidated financial statements. So also note, when you think about the consolidation process, it can be a little bit more complex than just the parent and one subsidiary. And when you think about a parent subsidiary relationship, you’re probably thinking, first of all, we would think, well, if it’s a wholly owned, subsidiary, 100% owned, then that might be a little different too. But note, you might have a bit more complex of a situation where we might have for example, the parent owning 75% of one company, let’s say and then 52% of another company, and possibly 24% of another Well, we have over the 51% to exercise control over these two. So these two would typically be considered the subsidiaries that we would then consolidate, so we might have three companies in this case that we would consolidate neither of the two companies being fully owned by the parent, the parent doesn’t own all the outstanding stocks doesn’t own all of the voting rights.

But they have a controlling interest because anything that they say in a voting situation goes given the fact that they would we’re having have over the 51% for the common stock here, however, they only own 24% which is still significant significant influence, however, not controlling. So you would think that this company then would not be part of the consolidation process but then would be reported by p. as just a line item on Pease financial statement using basically the equity method, giving their exercising control, giving their over the 20% threshold for that useless usefulness of consolidated financial statements. Why do we put them together? Who are they useful for Who are they geared towards? Why have them formatted towards parties having a long term interest in the parent company? So notice, if you’re thinking about the financial statements that are consolidated, if you own PII, what you what you want to know is is what does he have control of I want to if I’m if I have an interest if I’m a stockholder, for example of P, or I have some type of long term interest in p, then I’m concerned with all of these holdings and I might want to see the consolidated statements. If on the other hand, I have holdings in one of the subsidiaries in some way, which is not a controlling holding or something, but a holding in it, then the consolidated entries may not be consolidated financial statements may not be the main thing I’m looking at, I might be looking at the financial statements of the subsidiary. So these the consolidated financial statements are typically for the parties having a long term interest in the parent company. So the controlling company, of course, that would be of course, the shareholders, the shareholders of P, not the shareholders of s, because remember what happened? The PB in the parent SP in the subsidiary, because remember that most of SS shares were saying our hold held by P, but not necessarily 100%.

So if if you’re a shareholder of P, if I own shares in the parent company, then I have an interest a controlling interest in s indirectly in a sense, right because the company p which is a separate legal entity of which we own shares, has a controlling interest owns over 51% of s, but we don’t have an inch or we don’t have our stock in s directly, right, we got our stock MP. However, there if we if p owns less than 100%, which is often the case they can have a controlling interest with anything over 51%. You could have still people that own stock directly in the subsidiary. And if you have people owning stock directly in the subsidiary, they’re in a in a different boat, and they may not be concerned as much with the consolidation. financials as with the financial statements of the subsidiary so we’re talking shareholders of P are most concerned with the consolidation. Creditors of P are most concerned management of course, concern provider any provider Basically of resources to pee. So anything I mean, if you’re a creditor if you’re given a loan to the parent company, if you’re a shareholder, if you’re management of p, then you’re concerned with the consolidation process, you want to look at the entity as a whole, if you’re trying to if you’re trying to make decisions on investment decisions, credit decisions and so on and so forth. So, give a in what are the consolidation financial statements do they give a picture of the resources that are under the parents control, as well as show the performance of the use of those resources. So in other words, they give kind of like a balance sheet and an income statement, the balance sheet given a picture of where the financial statements, you know, where the company that organization combined together, stand at a particular point in time, because P has basically control over the assets and liabilities, the net assets of the parent and subsidiary organizations given their controlling interest. And then on the income statement side, it shows the performance kind of overall as a whole between mean the two entities between the entities that again, the parent company, in essence has control over. So that’s what’s good about the consolidations, problems with consolidated financial statements.

So it’s not all good. I mean, obviously, when you start to combine things together like this, there could be problems because you’re taking two separate legal entities that maybe they could be in different basically do different things and whatnot, and you’re combining them together. So there could be kind of some some issues that aren’t so good with that as well. So accountability of the companies. So result, the result of individual companies are not disclosed. So if you’re looking at the consolidated financial statements, you’re basically saying, hey, I want to see you know, an overarching performance and where people stand situation between all companies. What that does is eliminate the detail of you’re not really holding each individual company accountable. In other words, you might have one subsidiary that had a loss or is not doing so well. But when consolidated together with the other companies, you can’t see that of course. So you’re not getting that detail. And you’re not holding each individual entity, which is a separate legal entity kind of accountable. If you’re just looking at the consolidated financial statements, financial ratios may be less representative. So oftentimes, when you’re taking the financials and making decisions, what you’re gonna do is make ratios do ratio analysis on it, the ratio analysis could be less effective in some cases, when you’re considering the financial statements in a consolidation basis. So financial ratios have a combined entity may not be representative of the performance of any single entity. So in other words, especially if you have entities that are doing different things and whatnot, then if you’re taking a ratio for the combined entity, then it may not be again it might not give you what you exactly want in terms of performance, as well as it would have if you were to apply those ratios on an entity by entity basis. uniformity problems, account of different companies may not be comparable even, even if they are similar. In nature, so if we have two different companies, and we combine them together, you’ll note through the combination process, of course, we’re going to have to group certain accounts together, we got, you know, assets, liabilities, income and expense, they’re all kind of the same in that in that category, but they’re going to be grouped together differently in different formats between the two between the entities. So so when you combine them together, even though you have similar accounts, the way you combine them together, may not be as uniform, right? It’s going to be some kind of conglomerate to kind of thing, kind of combining process that you’re going to be putting together that may not be as representative again, as if you looked at the two entities that designed their own financial statements to represent themselves separately, right. So when you combine them, you’re gonna have to do some combining process you’re gonna lose some some uniformity in the way the financials were put together between the separate entities. So you got less detailed disclosures as well. So if you had the if you had the two companies that were separate, of course, all the disclosures would be done. Detailed with regards to those, you know, those separate entities when you combine them together, then of course, you’re going to get a broader sense of disclosures that are going to be geared towards, you know, the whole group the larger picture rather than the on the entity type of level level subsidiary financial statements.