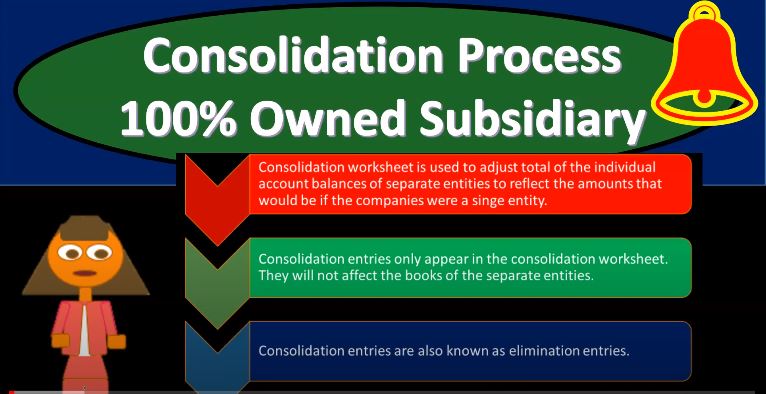 This presentation we’re going to take a look at the consolidation process for a 100% owned subsidiary. In other words, when we’re thinking about one company owning another company in advanced financial accounting, we’re usually looking at the situation and spending most of our time where we have some kind of consolidation process. So we want to Vin take the consolidation process and look at it in levels of complexity. So we’re going to start with a level of complexity, that’s going to be an easier setting where we will have 100% owned subsidiary, and then we’ll go from there and add more complications to it. Get ready to account with advanced financial accounting to ownership and control and prior presentations, we took a look at different methods based on different levels of ownership and control. We said in general, if we had zero to 20%, we use the carried value and then 20 percents kind of an arbitrary number, but if we’re over that amount, we’re really looking at the term of significant influence it for over the 20% from 20 to 50% then The assumption is that we would be using the equity method because the assumption would be if over 20% unless spoken otherwise, unless some unreal, some reason, otherwise, we would then have this significant influence and therefore be justified to use the equity method. And then if you’re over 51%, then you may have the consolidation. Now, when we think about these two methods that they carried value in the equity method, we can basically explain those as we go, you know, if you got anything from zero to 20%, then we could just basically say, yeah, then you fall into this category, let’s talk about the accounting in general.

And it’ll all be pretty much the same, you know, pretty similar. Same for the equity method, okay, you’re you have significant influence, you’re using the equity method, we can go through the steps, and it’s all pretty, pretty straightforward. Now, if you get to the consolidation process, where we’re going to take two separate entities and kind of combine them together and report them as one, well, then it’s a lot more than you know, it’s more complex, they’re going to be a lot more nuanced. It’s not as simple of a thing to just say, Well, this is how you do it in general. So now we’re going to be spending Most of our time over here and say, all right, well, let’s think about this type of consolidation. In general, we’re going to, you know, have two sets of books that we’re going to consolidate together. But that consolidation can be more difficult with regards to difference in different factors. So the first factor will typically be considering here is where we have the fully owned subsidiary, right. And that’s going to be a little bit easier because we have complete control, we’d have to split things, you know, split things out. And so that’s going to be the easiest thing to generally think about. So again, control, typically being and we may result in consolidated financial statement when control happens, which would be over 51%. And because that would mean that you would have control you can, you could vote, you know, and win every vote if you have that you’re going to vote on so you would be assumed to have control at that point in time. Now, let’s think about the situation where we have 100% because that’s going to be easier for us to first wrap our head around and then add complications as we go. So accounting related to ownership. We’re going to have the assumption here again that we have 100% owned subsidiary.

And the subsidiary was created by parent, or was assumed it was purchased for an amount equal to the book value of the net assets. So if we have 100% owned subsidiary, that’ll make it more that’ll simplify our problems when we first take a look at it. And the subsidiary was created by the parent, if it was created by the parent, then you have like a non market type of transaction, the parents just said, Hey, I’m just gonna make a subsidiary account here, another company, I basically take my one company and break it up into two and result in a parent subsidiary relationship, typically, where in that case, you would have you know, the subsidiary will of course be 100% owned, in that case, because it was created by the parent company. So that would be the general case, or it was purchased for amount equal to the book value. Now again, this isn’t something that happens all the time because when you make a purchase, that’s going to happen if you were to purchase another company Then you would say, Okay, how much am I going to purchase it for? Well, you would take the assets minus the liabilities, that would be the book value, right? And then if you purchased it from the for the book value, then you would, you would assume that would be the fair value of the company. But that’s not typically, you know, often the case. So if you’re purchasing another company, you typically then have to think about about revalue in it to the fair market value and having goodwill and whatnot. But if you take a look at these two assumptions, these are the easiest way to kind of kind of step into these type of journal entries and then add more complexity objective, combine the financial statements are two or more entities as though they are one entity. So if one company has control over the other company, then it would be nice if you’re trying to get information to a third party to use with regards to these entities to give them information, it would seem appropriate then, to combine their financial statements together and show a combined financial statement.

So that’s going to be our objective. We will use a consolidation worksheet to help with this process. So then of course, how do you do that? Well, you’re gonna have to take the financial statements of one the financial statements of the other, put them together in some way. And we’re going to be using a worksheet to do that a consolidation worksheet, eliminating journal entries will be needed to prevent double counting of certain items. So once you do the consolidation you got Okay, here’s books for the first company books for the second company, we add them together. And that’s fine. That’s okay, that works. But then Arthur is going to be some things that overlap Yes, there will be some things that overlap because, and what we’ll talk a little bit about them, but we’re going to have to eliminate some entries that are going to basically, you know, not work when you put them together, you have basically double counting if you if you weren’t to have eliminated entries. So the consolidation worksheet, what’s the consolidation worksheet all about that we’re going to be using in this consolidation process helps with the process of combining amounts of separate companies in a consolidation. So obviously, if we have two sets of books, two different financial statements, we’re going to put them together we need some process to do so that process that tool, the consolidation In a worksheet is a tool adjusting the combined balances to amounts that would be reported if all consolidated entries were a single entity. So if all consolidated entities were a single entity, so that’s our objective to take these multiple companies and it could be more than two, we might have, you know, multiple subsidiaries and whatnot, where there’s a controlling interest that we would have to basically combine together and we want to report them and show them as basically as though they were a single entity.