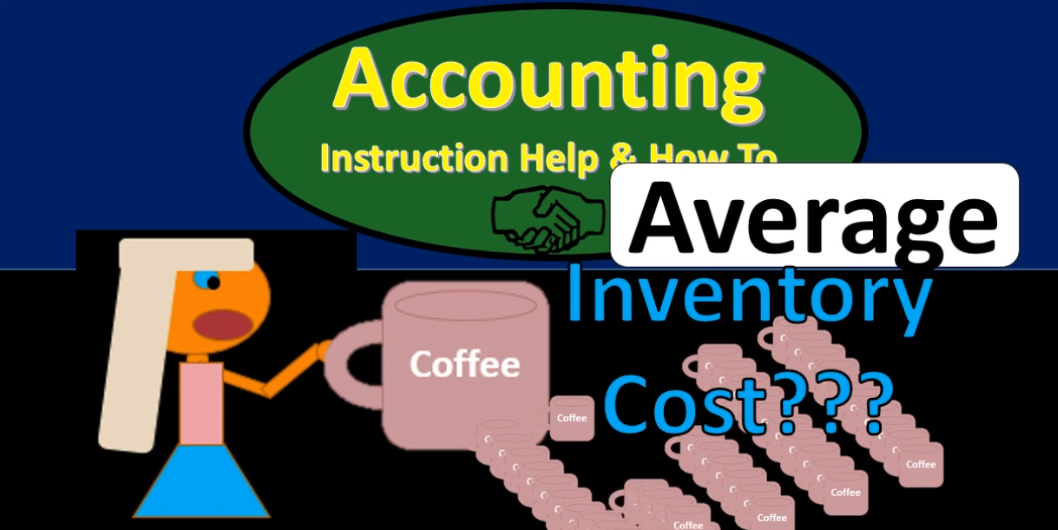 Hello in this lecture we’re going to be talking about the average inventory cost method we will be selling our coffee mugs again we will not be using a specific identification but rather a cost flow assumption VAT assumption being the average method, we will be using the same worksheet I highly recommend working on a worksheet such as this when when doing any cost flow assumption for inventory, which will include a purchases section, a cost of merchandise section and an ending inventory section in which pieces we can then calculate the unit cost times the quantity to give the total cost for each of the sections. This can answer the most amount of questions that can be asked for this top. If we take a look at a trial balance, we can see that the inventory on the trial balance is at 5000.

That’s $5,000 worth of inventory. What we need to do is convert that and be able to see that in terms of units because we often think of inventory as units for example, 100 units here, how do we convert that to the $5,000 worth on the trial balance? That’s what we need. worksheet for in order to backup that number on the trial balance on the balance sheet, what we’re going to start off with is do we hundred units at $50? Yes, they’re expensive coffee mugs here, and that’s going to be $5,000. That’s the total of the $5,000. That is on the trial balance, that’s where we will then start, we’re going to have a purchase of 400 units at 250 $5. So in terms of units, of course, we have the hundred, we now purchase 400, we have 500 units, the journal entry to record that is straightforward at the same under all the methods that we have been using, there’s no estimate for the journal entry related to the purchase because we purchased it for whatever we purchased it for, in this case 400 times 55.

So if we purchased it on account, we’re going to have a debit to the inventory of the 22,000 which will increase the inventory from 5000 by 22,000. To that 27,000 and the credit will be to accounts payable will kind of pay at sometime in the future, the liability then increasing at that time. Point. This 27,000 is a straightforward journal entry, but it’s not so straightforward to think about what the worksheet will be we’re going to put this of course on the worksheet we need to backup that $27,000 worth in terms of units. Last time, we have the 100 units at $50. Now of course, we’re going to put on the new purchase of 400 units at $55. That gives us the $22,000 worth 400 times 255. We are going to do a similar process in terms of pulling the layers down as we did last time. 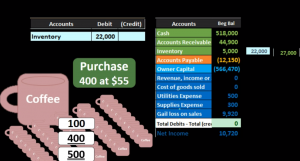 But then we’re going to calculate the average method. So we’re going to put the first layer down, we still have the hundred units at $50. We have the second layer of $455. But when we sell the units, we’re not going to sell them in terms of which $50 units or $55 dance We want to have an average here we just want to say they all cost about some amount. You might be tempted to take an average of 50 plus 55 divided by two that doesn’t necessarily work. Because it’s not a weighted average, you’ll note that there’s a lot more units 100 units at I’m sorry, there’s a lot more units at the 55 400 units than there are at the 5100 units. Therefore, we need to calculate the weighted average. The way to do this on this worksheet is to calculate the total quantity 100 plus 400 500 units, the total costs the 22 plus five being 27,000. So we have 27,000, total cost 500 units. 27,000 divided by 500 means that all the units cost about near $54. Therefore when we make the sale, we’re just going to say that they cost about $54.

At this point, that’s going to give us the total which we can calculate a couple different ways it was the five plus 222. And of course, now, the 500 times the 54 equals that 27,000 our average that average is of course what’s on the trial balance at the 27,000 in inventory. Now let’s record our transactions for a sale we have a sale of the 420 units at $85. In terms of units, we’re saying it’s the 500 units minus before 20 gives us 80 units that are leftover. The sale remember has two separate journal entries, the first half of the journal entries straightforward, because the sales price has nothing to do with the cost worksheet that we have been tracking. So keep that in mind if you see that a sale happened at $85, the sticker price, sticker price doesn’t have anything to do with the cost that we’ve been tracking. So that’s going to be a straightforward journal entry we’ve seen in the past the first half of the sale would be a debit to accounts receivable if we sold it on account.

And that would increase the receivable, the assets and a credit to the income account. 3535 700 been for 20 times 85 increase in revenue. That is going to be the same transaction we’ve seen in the past. Just remember that when you see that sales price, that sales price doesn’t have anything to do with the cost worksheet, what does well now we need to figure out the second half of the journal entry where we reduce inventory and calculate the cost of goods sold and record the cost of goods sold. We need to know what that number is How much do we reduce it by four that we need our worksheet. And this part’s really straightforward in terms of the average method, because we already calculated the average in this case where we said it was the 54 units. So we’re all the units we sold, which in this case are 420, are going to be about $54, meaning we have the cost of goods sold of 22,606 80, that’s going to be the cost of goods sold. That leaves us with remember we had a total of 500 units minus the 420 80 units, and they all still cost now about $54.

At times 254, means that we’re left with 4003 20. That’s the total that’s going to be left. Therefore, what we’re going to do is we’re going to record the cost of goods sold transaction for the 22 six at reducing inventory recording cost of goods sold, then we’ll be left with an ending inventory on the trial balance of 4003 20. Let’s see that process second piece of the transaction will reduce the Inventory by that 22,680 reducing inventory from 27,000 by the 2680 to about 4320. Second half of it cost of goods sold being the debit the expense side of the transaction, bringing Cost of Goods Sold up to that 20 to 680. The point now is that that 4003 20 is what is represented on the trial balance and is backed up by our inventory worksheet for the dollar amount for those 80 units that are left