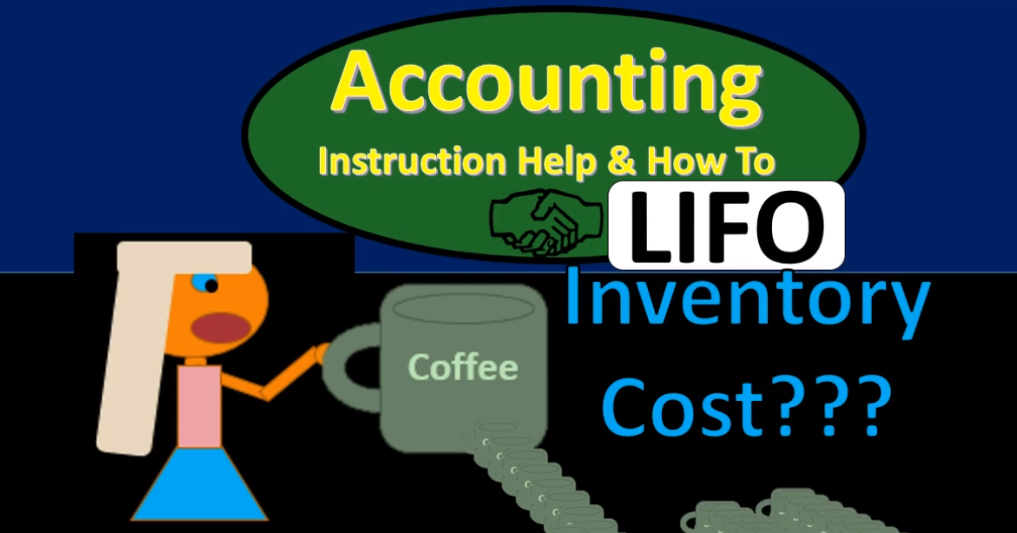 Hello in this lecture we’re gonna be talking about the lastin first out inventory method, we will once again be selling our coffee mugs. Here, we will not be specifically identifying the coffee mugs that we sell, but rather using a cost flow method, that method been a lastin. First out this time, whenever doing a cost flow method, I do recommend setting up a worksheet such as this with three parts to it having the purchases, the cost of the merchandise and the ending inventory, and then calculating the units that we’re going to sell the unit cost and the total cost for those particular categories. As we will do here. This will answer the most amount of questions in any format that those questions could be asked. What we are trying to do here is of course, say that the inventory that is reported on the trial balance needs to be backed up in terms of a worksheet Why? Because on the trial balance, it’s reported in terms of dollars.

And of course, when we think about inventory, we often think about it in terms of units. We then need to back up this dollar amount with a unit amount and the cost per unit. That’s what we’re doing with the cost flow assumptions, we’re going to start off with 100 units, we’re going to say those hundred units started with a cost of $50, meaning that the total cost will be 5000. And that’s the only layer we have so far. So the total is 5000. That $5,000 now matches what is on our trial balance. That will be the purpose of this worksheet. Next, we’re going to say that a purchase happened we purchased 400 units at $55. Therefore in terms of units, we have 100 units. Now we purchase 400, we have 500 units, the purchase price, the journal entry for the purchase, straightforward, it’s the same for FIFO or LIFO, or average, it is what it is we bought 400 units at $55. We’re going to have to pay that either now or sometime in the future.

There’s no estimate going on in terms of the journal entry, we’re going to put on the books 55 or we’re going to say that $55 times the 4000 22,000 inventory increasing from 5000 In the debit direction of 22,000 to 27,000, then the other side we’re going to say we bought it on account will then go to accounts payable, increasing the payable by the 22,000 to 34 150. No change with that journal entry. However, we now have this 27,000 on the books in terms of inventory, we need to put that into our worksheet and be able to back that up with the amount of units that we then have. At this point in time we have the 100 units at $50, we’re going to say that we bought another 400 units. So we’re going to go into the purchases column and say that we have 400 more units at the $55 for a total of 22,000. We’re going to have two layers, I’m going to put all the layers under this red line, this red line represents the last transaction, we want to have everything in Indian inventory under this red line as of the end of this process. 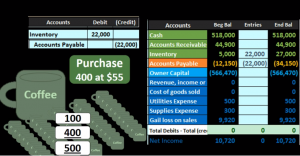 Therefore we’re going to bring that 100 units at $50 down and we’re going to pull Is $455 over. Therefore we have 100 units that cost 5400 units that cost 55 for a total of 5000 plus the 22 given us that 27,000. Vat, of course, is the amount that we have on our trial balance that we have now backed up the dollar amount using our worksheet. Now the question will be when we make a sale, Which ones did we sell, the older ones have 100 units at 50, or the newer ones at $55. Under life, we will be selling the newer units, you would think we’d want to sell the older ones first. But it’s just an inventory assumption. And if we don’t know which ones were actually sold, we can make whatever assumption we want. In this case, we’re making the assumption that we sold the newer ones but once again, we’re getting ahead of ourselves. Let’s take a look at a sales transaction in which we sell 420 units at $85. So we had 500 units a minus the 420 units in terms of units. We’re then going to have the 80 units left after this process. The sales journal entry often is overlooked when we focus on the cost of goods sold, because we’re looking at the cost, not the sales price. So when we see this $85 in a problem, when we spent so much time working on the cost sheet, we may try to figure out how that 85 ties into the cost sheet. It doesn’t.

So when we do this first journal entry of the two sales journal entries, there’s really no difference that happens, we’re gonna say the sales price that’s going to be on the sticker price times the number of units 420 means that we’re going to have accounts receivable, assuming we sold it on account of the 35 seven the 420 times 85. That will increase the receivable and the revenue will then be the same amount for the for 20. crediting revenue, increasing revenue for the amount that we So how much did the inventory go down by in terms of dollars and how much of the cost of goods sold should we report we know the number of units that we sold. We don’t know the cost of those units without our worksheet. So let’s go to our worksheet. We’re going to say another red line here we have these two layers. Got the hundred units at 50 to 455? Which one of those are we going to take pull from first, assuming we use a lastin. First out assumption, if we sold 420 of them, answer is the last ones we purchased. So the 400, the newer ones, we’re going to say in our cost of goods sold column, we’re gonna say we sold the entire 400 units, and those cost $55 400 times 35, will give us the 22,000. We sold 420 total. So if we sold 400, and wiped out that layer, we’re going to have to sell the rest for 20 minus 400, or 20, to give us the total of 420. 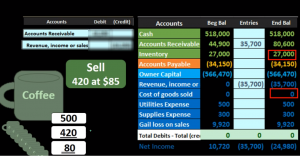