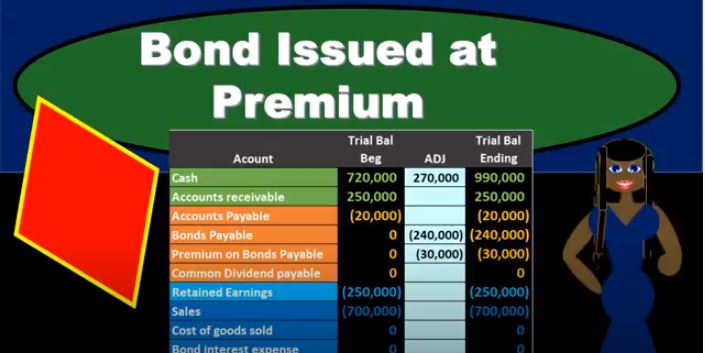 In this presentation, we will take a look at the journal entries related to issuing a bond at a premium. When considering the journal entry for a bond, remember what can change and what is the same for a bond. When we think about a bond, it’s already been printed, we know the amount of the bond, the interest on the bond, the maturity date of the bond, these are already set. So if we’re making a negotiation with the bond after it had already been printed, then we can’t change the face amount. We can’t change the interest due dates. What can we change in order to negotiate and make a sales price on the bond, we can change the amount that we issue it for. So keep that in mind. Whenever you think about these bond problems. That’s the thing that’s going to differ from a bond to a note. The thing that changes when we want to loan is the interest rate. The thing that changes when we want to issue a bond that’s already been made is going to be the amount we receive For the bond being different than the face amount of the bond if there’s a difference in the market rate and the contract rate. So in this example, we’re saying that we issued a bond. Now note that when we think about the issuance of the bond, just like a note, we often have more information than we really need. And that can be a little bit confusing for us.

So here we have the number of years on the bond, we’ve got the face amount of the bond, and we’re actually given the issue price on the bond. And then we got the interest rate on the bond and the market rate. Now if they give you the interest rate, I mean, if they give you the amount that you issued the bond for, then all this other stuff is not even needed, just like it is with a note like I don’t even know I don’t need to know the interest either the market rate or the or the the rate of interest on the bond. In order to record the issuance of the bond. If it’s given to me how much we we issued the bond for because the interest will come into play. When we make the interest payments at a later time as we incur interest as time passes, what we do want to realize just from a theory standpoint, however, is the reason why we’re issuing the price for 270, when the face amount of the bond is 240, and that is because the face amount is what we’re going to pay back at the end of the term of the bond, just like a note. So normally, you said you were taking Well, we’re going to pay back 240. At the end, we would like 240. Now, we’ll pay you back at 240 at the end plus interest.

But we’re not going to do that because the rate of interest on the bond different from the market, our bond rate, the contract rate is 8%. We’re going to be paying on this bond 8% of the 240,000. But the market rate is only 5%. Meaning other people could go elsewhere in only get a 5% return and we’re paying out an 8% return. So that means We’re gonna, we’re gonna say, Well, that’s true, we can’t lower this to 5%, what we can do is say, Well, you know, we’re paying out more interest and other people are paying. So instead of getting the face amount, the 240, if you give us 270,000. Now, we will give you back 240 at the end of the time period, and we’ll pay you at this higher interest rate to make up the difference, the 8%, rather than what you would get elsewhere, which is just the 5%. So that’s the reason for this. But if we record this out, we’re just going to say, well, is cash affected? We’re going to say, Yeah, we got cash. That’s why we’re issuing the bond with a company we’re issuing the bond. Cash has a debit balance, we’re going to make it go up doing the same thing to it. Note, it’s always nice to have a trial balance here. So this is just a short trial balance just to show us something that is in balance as we issue these. So we’ve got debits being non bracketed or positive credits bracketed or negative debits minus credits equals zero meaning debits equal the credits, and the net income is current. 700,000 revenue less than zero expenses, that’s that’s income, not a loss.

So we’re going to debit cash, increasing the cash, that’s why we’re issuing the bond. And then we’re going to have the bond payable for the 240. Note the difference here, we only we got 270, we got more cash than we owe at the end of the bond, we only owe 240. So there’s a difference, of course, and that’s going to be the 30,000. And that’s going to go to what we’re going to call a premium, it’s going to be the premium on the bond. So if we record this, we can see what it’s going to look like the cash is here, here it is on the trial balance is going to go from 270 720,000 up by 270 to 990,000. The bond is going to go from zero up in the credit direction to 240 and then the premium. So here’s the premium. It’s going to go from zero up by 32 30,000. So what does this mean, then? Well, of course, we got cash, that’s the point. And then we owe back 240,000 at the maturity of the bond. But then we have this other 30,000 that looks, you know, it’s part of this, meaning the carrying value of the bond, if we add those together, is actually going to add up, of course, to the 270. But the question then is, well, what are we going to do with this premium, I mean, it has to go away at the end of the time period, and we’re not going to pay it out at the end, we’re only going to pay 240,000. So as we pay interest payments, we’re going to reduce this premium. at the same point in time periodically as we record interest payments, we’re going to record it and reduce it as the bond goes through towards maturity in the form of interest expense.

This should seem unusual, because what’s gonna happen is we’re gonna have to credit we’re gonna have to debit this to make it go down and we’re going to credit it Interest expense, which is weird because interest expense is an expense and it only typically goes up. We’re not really generating revenue here. But note what’s really happening here. Why is that the case? Well, this premium is a result of the the our interest payments of 8% be higher than the market rate. So really, what’s going to happen is we’re going to pay out the 8% on the market on the on the bonds here, because that’s our contract price. But then we’re going to reduce it by the premium amount. And so really, our interest payments are going to be closer to the to the market rate, we’re kind of putting that difference between the market rate by reducing the premium so when we record interest expense, we’re going to be increasing it by what we pay the 8% and then decrease in hit by the allocation of the premium, which is really a result of that difference between the market rate and the contract rate. Also note of course, there’s no activity on the net income at this time. So it’s all balance sheet accounts, we got cash we owe back in the future. We will record the interest as we go through time as we incur interest as the as the money is being used. That’s when we’re going to record the interest expense in accordance with the matching principle.