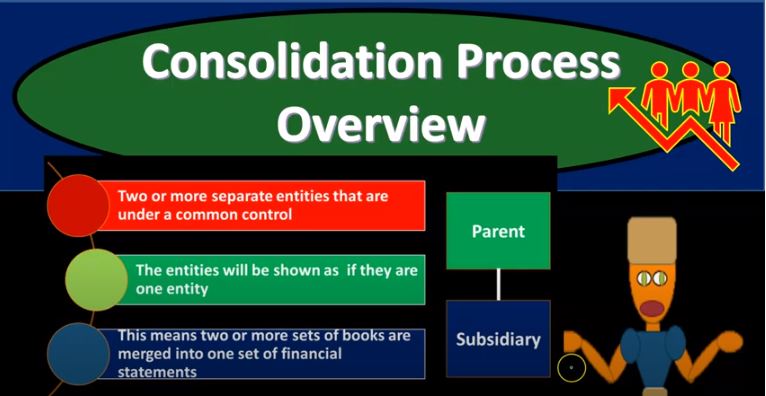 In this presentation, we will take a look at an overview of the consolidation process, get ready to account with advanced financial accounting, consolidation process overview we’re talking about a situation where we have two or more separate entities that are under a common control. So the basic kind of format of that you’re imagining here, then you have a parent and a subsidiary, these are going to be connected in some way shape or form because the parent has control over the subsidiary, we can imagine more complex situations, for example, having one parent and multiple subsidiaries as well. The entities will be showing as if they are one entity. So if we have a situation like this, if there’s a control type of situation, it’s quite possible then we’re going to have the the subsidiary and the parent These are two separate companies have a consolidated basically a financial statement. So the financial statement the idea of that being we’re going to take these two financials and represent them as if these two separate entities in this case, two or more can be more than two are one entity. This means two or more sets of books are merged into one set of financial statements. So obviously, what does that look like from a practical standpoint, we have the parent company, we have this subsidiary company, they have two sets of books, we’re gonna have to take those two sets of books and put them together for the financial statements. Here is an example of a slightly more complex situation where we still have parent subsidiary relationships but multiple pole subsidiaries in this case, so we have the parent subsidiary one where there’s a 75% ownership. So we’re over we have a controlling interest, we’re over that 51, we’re going to say there’s a controlling interest here, therefore there’s going to be a consolidation. So we’re gonna have a consolidation subsidiary to is owned 52%. So we’re still over the 51.