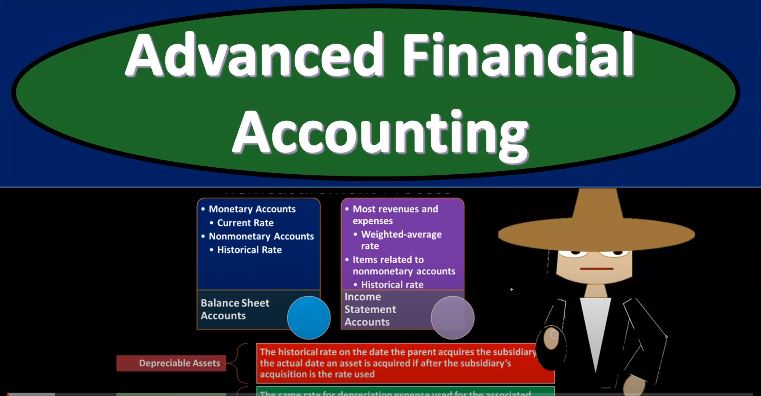 That’s the rate we use most of the time rather than what we’re doing here. remeasurement for assets and liabilities and translation, we typically use the end date of the balance sheet date. For translation, we’re for the remeasurement however, we’re going to deviate from that more and so we’re not going to deviate are where we have this monitor the monetary items, so the monetary items being cash, and then the receivable would make sense because we’re going to get paid in monetary units. So we’re going to remeasure that not when we got the receivable When people owed us the money, but when, at the end of the day just like we would before, because we’re going to be receiving cash, it’s the monetary unit. Same with the payables, same logic behind that. So we’ll be using what I would think of as kind of the default rate there on these accounts, then we’re going to be used the same rate for the balance sheet account than we typically would for the translation process. So remeasurement process balance sheet accounts. So we have the monetary accounts are going to be using the current rate and then the non monetary accounts. So things that are non monetary, like the inventory possibly, or property, plant and equipment, land and whatnot, those are going to be using historical rate. So we looked at the monetary accounts, these are the ones that will differ the non monetary accounts, I mean, will be the ones that will differ typically from the translation process and the remeasurement process. So for the remeasurement process, we’re actually going to have to go back and basically look at when these things were purchased like that, like the property plant and equipment, we’ll have to consider The historical rates to use and think about when they’re purchased, or when, when the parent company purchased a subsidiary. And then on the income statement accounts, most revenue and expense accounts will use the weighted average rate. So on the income statement accounts, it’s going to be very similar to the translation process in that most of the accounts will use the weighted average rate, which makes sense that would be what I would think of as the default account for the income statement, because the income statement is covering a time frame a beginning and an end. And therefore, if we’re going to choose one rate to represent the amounts on the income statement, you would think we would use some type of average some type of representative right that will represent the entire time period. However, there is a difference for the remeasurement in that the items related to non monetary accounts will use the historical rate. So items with a non monetary account, so things like depreciation, which are linked to the assets, we’ll be using it we’ll be using a historical rate, which is something that will differ on the remainder remeasurement process which we’re looking at here and the translation process, so depreciable assets, the historical rate on the date, the parent acquires the subsidiary or the actual date and asset is acquired if after the subsidiaries acquisition is the right to use. So this is where it gets a little bit confused in here, because we’re talking about a balance sheet account here. We’re saying Okay, now we have the historical rate, we’re going to deviate from what we typically do for the translation process. And then we’re going to think about, well, what rate would we use, then we’re going to be using the rate either that the depreciable asset was was purchased. So we’ll use the historical rate. However, if the if the asset that was purchased for the subsidiary was purchased before the time in which the parent company purchased the subsidiary, then we’re going to use the time period that the parent purchased the subsidiary. So it’s going to be the later of the rate that we’re going to use will be the later of the time that the parent purchased the subsidiary and the way I would think about that Is that when the parent purchased the subsidiary, that was basically kind of like a market transaction.

This is where differs a little bit because if this was just the translation process, if we use one rate for the entire income statement, the average rate, then we can actually take net income and just multiply it times that line item. However, since we’re going to be using two different rates on the income statement for the remeasurement, average and historic, then we got to basically break that out and figure out what net income is, and we have those two rates, so it’s a little bit more complicated, then we’re going to subtract the dividends, same process in net, we’re going to be using historical rates, the rates when the actual dividends were paid. And that’s simple. That’s going to be the same for translation and remeasurement. That’s going to give us then the retained earnings at the end, which will be mixed. So remeasurement processed, the end result of the remeasurement process is the same as it If the foreign entities transactions have been recorded in dollars, so that’s, that’s kind of the objective, we want to basically be happening here. So when you think about remeasurement, and and you can think about the reasoning of this, you’re saying, Okay, if you’re saying that the foreign you got the subsidiary in the foreign company, they got their books in foreign currency. And then the question is, is the functional currency, the foreign currency? If it was the foreign currency, if their functional currency is the foreign currency, then we’re, the idea was like, well, it’s proper, then that they keep their books in the foreign currency because that makes sense, because that’s their functional currency will just take those numbers and translate them into US dollars, so that we can then do measure them in one measure in unit and combine them together with the parent. However, if the functional currency is actually the US dollar, because even though the books are in the foreign currency, and the foreign company is in, you know, a foreign country, it’s actually more linked to the parent company in some ways. You can go over the characteristics in a prior presentations about what it means to be a functional currency. But if that were the case, if the functional currency is the US dollar, then the idea is, well, really, we should basically be putting this together as if the transactions were recorded in US dollars. Basically, we translated all the transactions in US dollars. So that’s kind of where the differences are coming into play with the remeasurement. And the translation, even though we’re we’re looking to get to really kind of the end goal, and that we have something that’s really measured in dollars.

So we can do our combination item but the difference is going to be on focus on what what the functional currency was between the two. So the debits and credits will remain equal in the local currency trial balance. So obviously, we’ll start with the trial balance for the local currency, it will be in balance in terms of the local currency, and then due to use of different rates during the repayment process. The debits and credits will generally not be equal after we measure the trial balance. So then we’re going to remeasure the trial balance from the foreign currency to US dollars, we’re going to use different rates to do that, as we have discussed, since we’re using different rates and not one rate, we will then be out of balance in terms of debits and credits, it remeasurement gain or loss will be used to balance the trial balance, we’re then going to record a remeasurement gain or loss because we’ll be out of balance and the difference is going to go to the remeasurement Bank gain or loss. Now the remeasurement gain or loss will be included in the income statement, not other comprehensive income. This is what’s different here. Another thing that’s kind of different from the translation process and translation, we would put the difference into other comprehensive income. We’re basically saying by putting it into other comprehensive we’re basically saying, you know, we did our best to use the best rates and we have this difference due to the different rates we’re going to use and we’re going to put it into other comprehensive income so that you can see net income without you know this included in it and then you can see the effects of the remeasurement process for translation with revisions. With with the with the remeasurement process as opposed to translation, we’re actually gonna put it on the income statement, it’ll be included in net income.