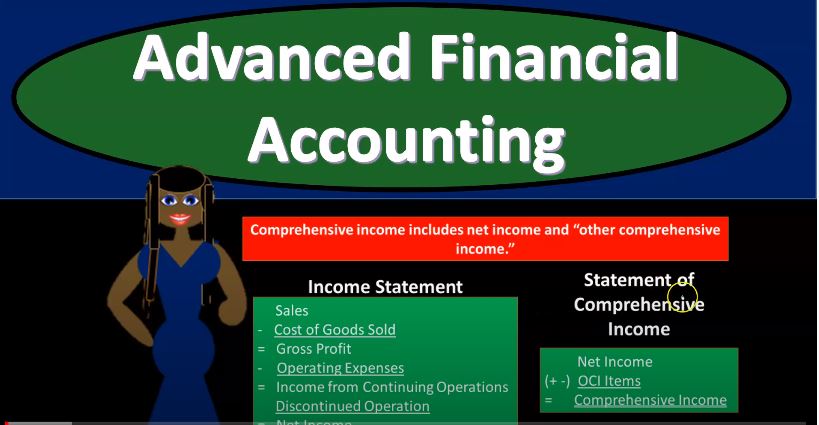 Advanced financial accounting PowerPoint presentation. In this presentation, we will discuss translate financial statements of foreign subsidiary, get ready to account with advanced financial accounting, translate financial statements of foreign subsidiary. So we’ll go through the general process of the translation process for the revenue and expenses, the average exchange rate for the period covered by the statement is the rate that is generally going to be used. And again, this would make sense, because if we’re talking about the revenue and expenses, we can’t really pick one rate, because that is a statement of how the performance did over time from beginning to the end. And therefore we need to use some kind of rate that would be representative and it wouldn’t really make sense to use the rate at the end of the timeframe but possibly some average of it. So a single material transaction is translated using the rate in effect on the translation date. So then there could be an argument that could be made we could say okay, so We’re not going to use just one rate, like at the end of the time period like we’re using on the balance sheet generally, because that would make more sense on the balance sheet because it’s reported as of a point in time. But on the income statement, yeah, it makes more sense for us to use some rate that’s kind of reflective of the timeframe. So possibly we’ll use an average rate. But what if we have this really material type of transaction that’s really large transaction, maybe in that case, we should we should deviate from just an average rate and use the rate as of that point in time or like a historical rate at that point in time. assets, liabilities and equity. So now we’re talking about the balance sheet. So for the most part on the balance sheet, you would think all right, it would make more sense then for us to be using the current exchange rate, which would be as of the date of the balance sheet date. So which says as of the end of the time period, if we’re talking for the for 1231 income statements or financial statements for the year ended 1231 then we’re talking 1231. The end of the time period is when all the balance sheet accounts are reporting as Oh, As of that point in time, and therefore, for the most part, you would think that the current exchange rate, the rate as of that point in time would work. However, you can also think that the historical exchange rate might be used for some items, some, again, some kind of large items power, possibly for the property, plant and equipment.