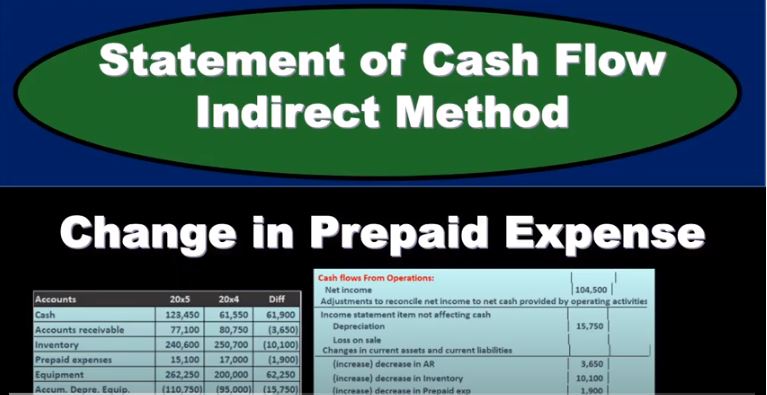 In this presentation, we will continue with the statement of cash flows indirect method looking at the change in prepaid expenses, we’re going to be using this information, we’ve got the comparative balance sheet, we’ve got the income statement and some additional information, we will be working primarily with the difference in the comparative balance sheet with the use of a worksheet taking this information to create this worksheet. So this is just basically a comparative balance sheet that has been condensed down to something that looks like a post closing trial balance. We are constructing our cash flows from operations from it, we have all of our differences. We’re basically just finding a home for these differences. We know if we do so that if we find a home for all of these differences, then it’ll add up to that difference, the difference in cash, which is basically the bottom line of our cash flow statement, or that’s what we want to get to in terms of adding up the cash flows. So we’ve gotten so far We’re working on the cash flows from operations. And we’ve done the cash flows in terms of the accounts receivable, inventory. Now we’re on prepaid expenses. We’re just going through these.

Now, if you have the cash flow and you’re actually working through the cash flow, by this time it comes becomes kind of easier saying go and well, that’s another prepaid expense. It’s in the prepaid expense. It’s a current asset, just like accounts receivable and inventory, it’s going to follow the same principle. So I would just think of this principle as we’ve gotten to it with accounts receivable and apply that here. So we’ll have the same concept. If you’re given this in a book problem. However, we may not have this principle here, you might have a test question asking about prepaid expense. And to do that, if we don’t know if it’s if it’s an increase or decrease or which which go on the cash flow statement, it may be easier to actually think about accounts receivable and then apply that same principle. So that’s how I would think about it. I would think, well, this is a current This is a current asset if I haven’t memorized that current assets, when they increase will decrease the cash flow and when they decrease, they’ll increase the cash flow, then I can think through the logic of that related to accounts receivable because that’s probably the easiest one to think through, because it’s the most clear set of two types of journal entries that go through that account and apply that same principle to all others.

So I won’t go through the full thing again for accounts receivable, but you can see the prior presentations to see the logic of accounts receivable, and then apply that same logic here. We can see that what happened here from 2004 to 2005 2000. Exports, you’d have the next five, we had 17,000 in the prepaid expenses going down to 15,100. So it decreased here on the difference. We’re increasing it on the cash flow statement. So So again, we’re just going to apply the reasoning here by saying hey, well that’s what we did with accounts receivable and we are going to show it here just with this abbreviated type of formatting. Notice in the in a final draft of a cash flow statement, we should say, increase or decrease and not have brackets around it. But when we look at a worksheet like this, we can put these in here. And this is a less formal kind of way to say it. Because it covers all of our bases, no matter what happens over here, we’re covered with an increase in a decrease, and it tells us whether an increase or decrease in the activity over here, what will be the effect on the cash flow statement. So it’s really useful to format when you’re working on something in this format. Once you’ve done so a few times, then you’ll have this in terms of a cheat sheet. So we’re going to say, Well, if it increases, and it’s a current asset, then we’re going to decrease it over here. If there’s a decrease, it’s non bracketed over here, then we’re going to increase it over here. The reverse will be the case when we get to liabilities