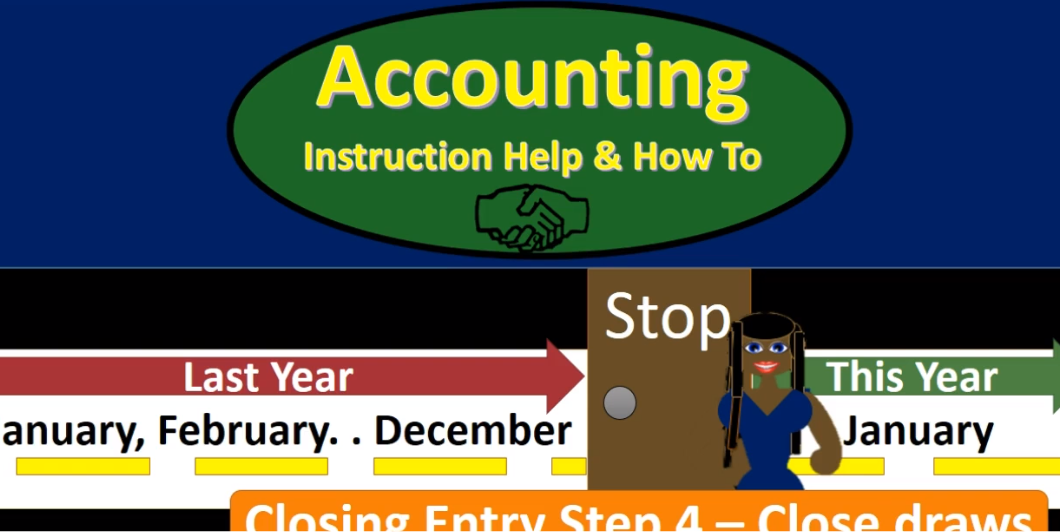 Hello in this lecture we’re going to continue on with the closing process with step four, the final step of the process which will be to close out the draws. Remember that the objective is to have the adjusted trial balance be converted to the post closing trial balance. adjusted trial balance is what we use to create the financial statements. And the difference between the adjusted trial balance and the post closing trial balance will be that we want to have all temporary accounts including draws revenue and expense accounts to be converted to zero and have all that be in the owner capital account meaning the owner capital account will now be including all these accounts underneath it crunched into basically one number, we’re going to do that with a four step process. 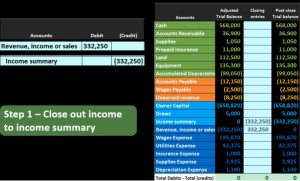 This is an account that on financial statements is on the statement of equity. And it also is kind of a contra equity account. Note the equity account represents what the company owes to the owner. If we stick if we take a step back and say we’re like the piece of paper where the company separate from the owner. This owner’s capital represents what is owed to the owner. That’s what the owner’s equity section is. It has a credit balance kind of like the liabilities do and the draws has a debit balance mean it’s the opposite meaning it’s kind of like a contra equity account, similar to the accumulated depreciation being a contra asset account because assets have debits and the accumulate depreciate Is contract to it? Why would that be the case, because drawls represents the amount of money that the owner took out. 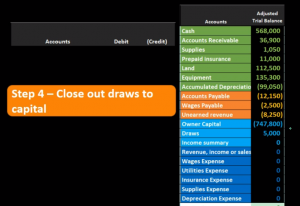 So if we think of ourselves as the business as the piece of paper separate from the owner, and we think about the capital account representing what that piece of paper owes to the owner, if that piece of paper paid the owner 5000, then it no longer owes that 5000 to it, and therefore the capital account should be going down by that amount. Let’s see if that’s what happens when we post out this final entry to the closing process, we see that there’s a debit balance in the draws account. And if we have a trial balance, it really helps us to see if it has a debit or credit, if we don’t look at the trial balance, we don’t have that cheat sheet, we could easily go the wrong way, I would always have the trial balance to take a look at it. We want to do the opposite thing to it because we want to make it zero, therefore we’re going to credit it and if we post that out, we would credit it and the other account is going to go to the capital we’re closing it out to the capital so the debit then we’ll go to the capital account if we post that debit to our trial balance, then we have the 747 800 credit, we did the opposite thing to it debiting it, that will make it to go down to in this case 747 40 to 800.

So this is what we have at this point in time we have all of the income statement accounts is zero, as well as that clearing account income summary between zero and the draw is between zero and the 740 to 800. Now should be the number that we reported on the balance sheet as of the end of the last time period, which was 1231. In this case, so the post closing trial balance we can think about as right after as of 1231. Right after we closed it, or we can think about it as the first thing that happened January period one where we have nothing in any of the temporary accounts including the entire income statement. It’s important to note also that although we were we are posting all of this as of 1231, the cutoff date after the close of the last period, we’re not actually doing it at that time period in time because obviously we would have to make the financial statements Which would take some time after the year in we’re posting everything as of 1231. 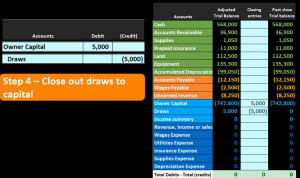 And we want to understand that if we’re moving from a report that is going from the prior period to a trial balance that’s going to another period that was after the closing process, that it’s going to show that all the income statement was closed as of the closing time period and then was rolled over To the equity section, we need to basically realize that as we analyze the reports, as well as understand it if we are doing the closing process, as well as understand that when we are making journal entries or making adjustments after a closed, close time period, we need to be very careful to be posting things to the prior time period, because you’ll notice all those accounts have been closed out if we post anything to 1231 or prior than to a temporary account. 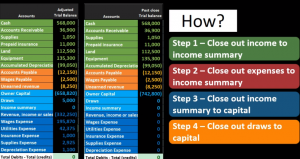