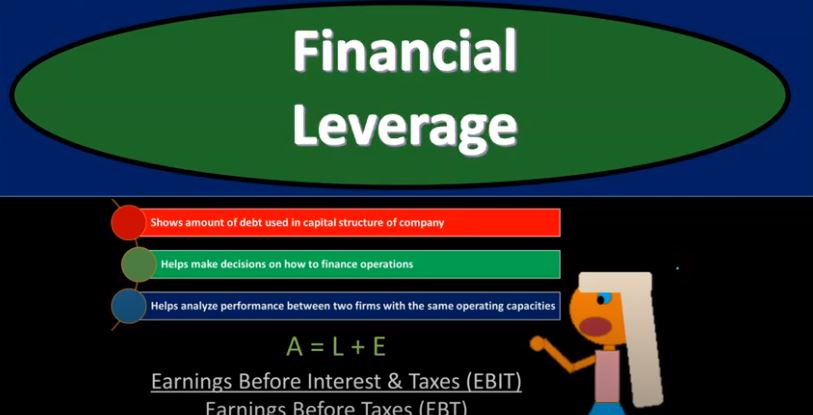 So you think of the fixed cost as being the leveraging component as the fixed costs go up with relation to the variable costs, then you have more leverage with the financial leverage, obviously, the leverage has to do with the debt. So how much debt we have, they have a similar effect, these leverage effects meaning they can amplify the outcomes when you have good times, or they can amplify the increase, and they can amplify things when you have bad time. So under certain circumstances, certain conditions, the leverage can multiply the effects that could be taking place. So the financial leverage, so is the amount of debt used in capital structure of a company. So we’re looking at the debt within the capital structure of the company, and helps make decisions on how to finance operations.

So when we think about the financial leverage, just like with any type of leverage, these are controversial type of concepts, in terms of what will be the ideal amount of leverage, because obviously, we do want to use them if we can maximize our results, but we want to limit the amount of risk related to them. So we wanted to look at these kind of calculations and compare them to our past performance and to other people within our industry to come up with our personal plan, as with regards to leverage, and the risk that is associated with that leverage. So it helps an analyst analyze performance between two firms with the same operating capacities.

So note that if you’re talking about different industries, they will clearly have different leverage levels, depending on the needs of that industry, so that you might have an industry standard with leverage regarding, especially operating leverage, but also financial leverage, depending on the industry, then once you’re within the industry, of course, then you can do benchmarks between your past performance as well as benchmarks with other people within the industry, to see if you’re within the range to see what the industry standard would be. Now, when you think about the types of leverage that the financial leverage, it’s useful to go back to the old accounting equation here, assets equal liabilities plus equity, and just consider what the financing does. If you’re going to take out a loan why why is the leverage beneficial? What does the leverage mean?

Well notice that the assets represent what the company has the assets or what the only reason that company has assets, the goal of the company is to generate revenue, and therefore those assets are there, because that’s the thing that we’re getting a return on. Those are the things we’re using in order to generate revenue. So if we’re getting a constant return on the assets that we have, then and we think that if we had more assets, we can, we can continue that constant return continue the revenue generation, then of course, our goal is to increase the assets. Now those assets are either financed by liability debt, or they’re financed by equity, which is the retained earnings, the retained income of the company, the income of the company, that’s not being given out in the form of dividends or draws of sole proprietor dividends for a corporation, and the amount of investment by the owners, such as the capital stock distribution, for the issuance of the stock from the company.

So if you need more assets, then you could try to just earn revenue, and then keep it keep it within the company instead of distributing it in dividends. But that could take some time, you could also say, well, maybe I can increase debt. If I’m able to increase debt and maintain a return on my assets higher than the cost of debt, the interest on the debt, then that could be a beneficial, you could see how that would leverage the firm that will give us the more assets that we need in order to generate the revenue. And so as long as if things are going well, then that could that could generate more revenue than we otherwise would have, without the leverage without the debt. But of course, if we have a decrease if things go down in time, that leverage can result to up to an increase in the in the rate of the decline that we have. And it could add risk with regards to default as well if things go bad.

And they might also you might also see it as contribution margin minus the fixed costs, which once again would get you to EBIT. And then we’re going to divide that by the earnings before taxes. So the earnings before taxes are the earnings before you’ve considered the tax effect. So that means that if you had net income, and you add it back, just the income tax effect, or if you didn’t calculate the tax effect yet on income taxes, that’s basically your net income before taxes, the difference between these two numbers that you basically have a net income before interest and taxes, and then the net income before taxes, the difference between those two numbers is net income is the interest and the interest of course related to the debt, that’s going to be like the rent on on the debt, right, the rent on the purchasing power of the money, the rent on on the loan that you took out, in order to generate in order to purchase more assets that you had the rents on the purchasing power, the money being the interest.

So that’s going to be our calculation for the financial leverage problems with the financial leverage calculation, the debt financing can be harmful past a certain point. So when we think about the leverage, in general, that’s going to be the problem. Of course, with the leverage, lenders will see greater risk in lending to a company. So the higher the leverage that you have, you notice if you’re financing the company, and you’re saying, hey, look, I’m getting a excellent return on my assets here. And I can get if I could just prove that that I’m getting return on my assets, I’m increasing sales a lot, if I could just prove that, then I should be able to get more money from a bank or something to get a loan, because I’m totally turning over that, that those assets in order to generate revenue in the bank should see that.

But however, of course, if this liability gets past a certain point, the lenders are going to be more skeptical to lend the money, because because they see that there’s going to be more risk. If that if that trend doesn’t continue, then there’s risk. And that could, of course, increase the bank’s skepticism, and also, then, therefore increase the interest rate, if they do loan any money. And then the common shareholders may drive down the price due to the perceived risk. So you have the same thing with the with the equity, if you’re a publicly traded company, or or you know, the value of your company is driven by the market by the by the market factors, how they value your company. If the debt goes up too much, you might be able to make the argument you’re saying, hey, look, we’re increasing the debt, because we’re getting an excellent return on it, it makes sense for us to do so. And that may well be the case, but the markets gonna, at some point, possibly say, Hey, your debt, to equity or debt to assets to high. And therefore we’ve, we perceive risk here.

And therefore, they might down downgrade the stock price or the value of the company, which would lower your ability to generate revenue through equity distribution, if you needed to do so in the future, increasing the problem in the case of a downturn. So that’s always the problem with the with these leverages, right? It, the leverage will amplify things as things are increasing. And then if there is a downturn, then then you want to make sure that you’re hedging enough for the risk on the downturn. So the debt can be most harm most beneficial during positive growth stage. So when you have that positive growth stage, you’re saying, hey, look, I’m getting a huge, I’m getting an excellent return on the assets, there’s positive growth, the market is doing good, then the more leverage you have, in order to get more assets, we’ll multiply the effect on the growth on the growth stage in general, stable industries.

So if this if the industry is somewhat stable, then you can predict more accurately whether or not you’re going to grow and you can be more likely or more assured that there’s not going to be a big decline, like a stable industry often used to be considered like the real estate industry, which, which was kind of thought that it would go up forever, and a steady increase forever in real estate always retains its value and whatnot. But you’ll see if there’s a decline, if there and if it actually does go down. Because of that assumption, you know, there’s more more risk, you know, that could be could be involved due to people possibly hyper leveraging, and implement implementing risk into the system that way.

So when operating in favorable economic conditions, so once again, when the economic conditions are good, then you would think that you would have more stability during that time period and hot and hopefully growth during that time period, those both things are going to be beneficial to leverage so people that are more risk takers, they like risk than are more likely to hire more highly leveraged their company, and they’re more likely to look really good. During these time periods. When there’s positive growth, the economy is expanding, and sales are going up. And people that are risk averse, they don’t like risk. They don’t like debt, because they don’t they just don’t like the risk are less likely to leverage or have as high a leverage.

And they’ll probably look better when things start to decline if the industry pulls back Then those will start to look at and notice if you’re in an industry that’s more stable in general, than it might be easier for you to measure what what’s an appropriate amount of leverage. If you’re in a highly volatile industry, then you’ll see companies that will, you know, skyrocket and then go go out because there’s a decline. At some point, they were doing great and then they fall and then they fall on the downturn. And so then you’re kind of looking possibly for companies or you’re looking for the stability maybe for a longer a longer period of time. So just some things that obviously have to take into consideration the trade off between risk and reward for leverage.