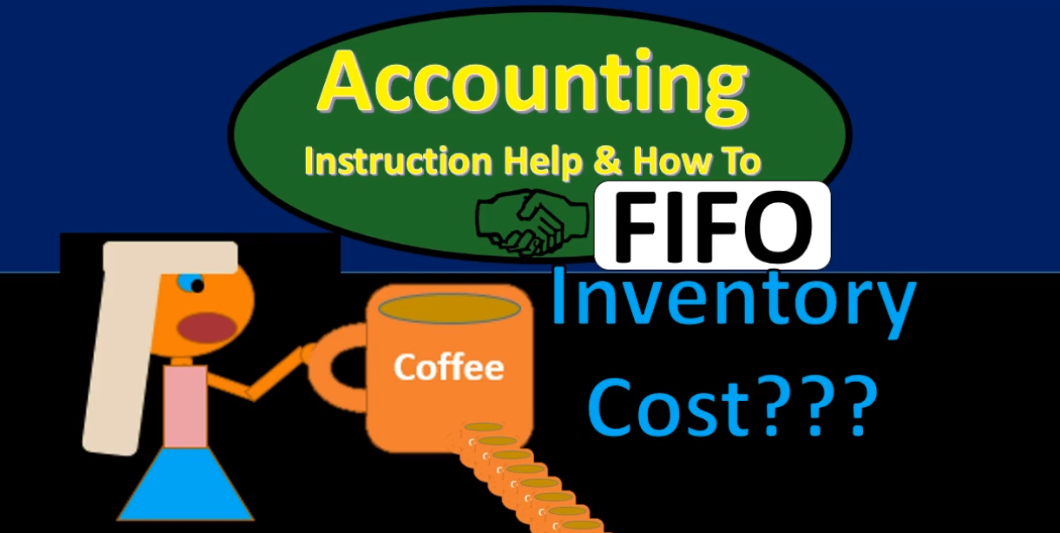 Hello in this lecture we’re going to be taking a look at first in first out inventory method, we will be selling coffee mugs and we won’t be specifically identifying the coffee mugs. In this case, as we’ve talked about in a prior lecture of this time, we’re going to be using a cost flow assumption VAT cost flow assumption being the first in first out assumption this time to set up this problem in any cost flow assumption, I highly recommend putting together a worksheet that worksheet including headers of purchases columns, and then we got the cost of merchandise columns, then we have the ending inventory. I highly recommend setting up a worksheet like this, whether it’s by hand or in a computer or in Excel because it answers all the types of questions that could come up with an inventory cost flow type of assumption within those sections, we will then have the quantity and then the unit cost and the total cost we’re gonna have, if we sell something, we’re calculating the cost of that sale.

I know they’re very expensive coffee mugs, they don’t look like much but 100 units times $50 and that’s gonna give us the 5000. So that is the only layer so that’s going to be the total cost that 5000 represents the 5000. On a trial balance, let’s take a look at some journal entries and see how we track this first transaction will be the purchase of 400 more units at $55. In terms of units, that means of course we had 100 units. Now we purchased another 400 units, meaning we have 500 units. The journal entry is pretty straightforward because we paid for what we paid for it’s not there’s no estimate involved in the journal entry. That’s the cash we paid, we paid 400 times $55. So we’re going to say inventory is going up with a debit of 22,000 5000 plus the debit of 22,000 brings inventory on our trial balance up to $27,000 worth of inventory. And then we’re going to say we bought them on account. So the credits going to go to accounts payable, we had 12,001 50, we’re going to credit increase in accounts payable to 34,001 50. That’s what we have at this point in time. 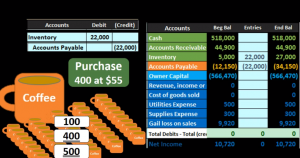 Now the challenge here, of course, is that we’re going to have to back that number up this 27,000 now needs to be backed up on our worksheet Last time, we left off with one layer of 100 units at $50. Now of course, we’ve got that 100 units plus the 400 to 500 units, what we’re going to do is draw a line under the prior transaction. First, we’re going to say that we have purchases, the purchases are going to be 400 units in the purchases column, we purchased them for $55. Note that that’s a higher cost than they were before rising prices, in this case, 400 times 55 gives us that 22,000. Then in terms of ending inventory, we now have two layers. We had some that cost $150 and some that cost 55. I want to have both those layers under this redline as of the point in time of the latest transaction, this purchase. Therefore, I’m just going to bring this number down. I’m just going to bring these down here hundred units at $50 gives us that 5000.

Then we’re just going to bring these over here and say the second layer was 400 units at $55 for 22,000. So the 5000 plus that 22,000 gives us the total cost of the 27,000. That dollar amount now is what is represented on our trial balance we have that backed up. Now, of course, the question will be when we make a sale, Which ones did we sell? We sell the cheap ones, the old ones at $50, or the more expensive newer ones at 55. Remember that the mug itself completely the same? It’s just the increase in price due to the time period in which we purchased it. Answer when we look at FIFO will be the old one. The first ones that were in will be the first ones wore out in this case being the cheaper ones. But we are getting ahead of ourselves. So let’s take a look at a sales transaction. We’re going to say we sell 420 units at $85. There’s two journal entries related to the sale remember that the first half of the journal entry is no different. We’re not tracking the sales price if they give us the sales price in a problem. It’s common for us to think well what does that have to do with our cost cheap?

Nothing. I mean, we might have used cost you to come up with a sales price. But the sales price is not what we are tracking. First half of the journal entry, nothing is different, we’re going to take the 420 times the 85. And that’s going to be your journal entry. In terms of the units, of course, we’ve got the 500 units minus the 420 gives us the 80 left, that’s what we’re going to have left transaction for the first half of the journal entry will be the debit of the 35, seven before 20 times the 85. And that will be increasing the receivable assuming we made the sale on account. So we’re increasing the receivable. And the second half of it will be the revenue account because we’re earning revenue at that point in time crediting the revenue for the for 20 times 85, increasing the revenue. This journal entry often gets neglected when we’re looking at the cost flow assumption, because that’s not what we’re focusing in on but we need to recognize that when make a sale, that that journal entry is still there. That’s a journal entry we normally focus on when we make the sale.

What we need to track now of course, is the decrease in The inventory, we had 27,000 in the inventory, what’s the cost of those 420 units that were sold? That’s when we need to go to our worksheets? Uh huh. Well, we have, we’re going to say these two layers, hundred units at 5400 units at 55. We sold 420 units. Therefore, we’re going to be working in the cost of merchandise, because that’s what we’re trying to calculate the cost of goods sold here. And we’re saying Which ones did we sell first? Well, we sold 420 units, we sold the old ones first, under the first in first out those being the units at $50. There’s only 100 of them, we sold for 20. Therefore we’re wiping out that entire hundred units, we throw 100 units at 50. That’s the assumption that we are making that’s given us that 5000 this layer wiped out Then we have 400 units, and we sold 420. So we’re gonna say the 420 minus 200 that we took out of the prior layer means we have another 320 that are in the second layer. Those are At $55 320 times 55 gives us the 17 six. So 5000 plus 17, six, that’s the cost of goods.

A question could ask that. Or they could be asking what’s left in Indian inventory, which we would then have to calculate using our worksheet here. And we’re gonna say, well, there was 100 units on this layer, we sold all of them. 100 minus 100, means there’s zero left, therefore, zero times 150 is zero. Then we have 400. And the second layer, we sold 320 of them, leaving us with that ad, there’s that ad, and those ad that are left event are at that higher cost of 5580 times 55 is 4400. Zero in the first year in the 4,402nd letter gives us 4400 that is left in Indian inventory. So remember, we have two things here that are going on that question could ask what’s the cost of goods sold 22 six, that’s the journal entry that we need to record. Well, leaving us with what’s left in ending inventory. After we record that journal entry, which will be 4400, let’s post the journal entry.