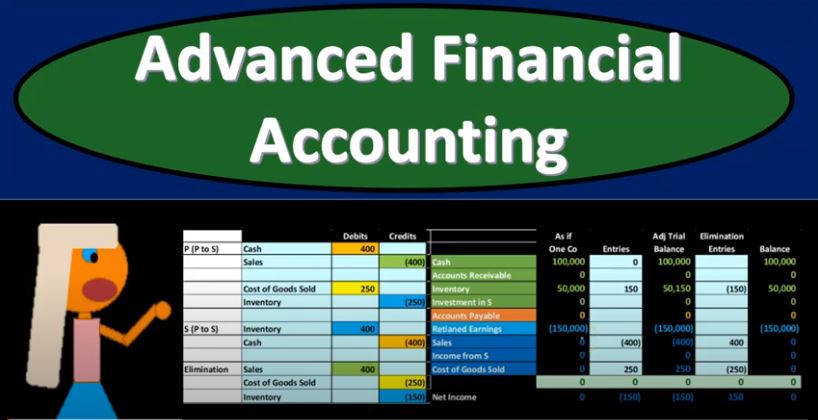 Advanced financial accounting PowerPoint. In this presentation we will discuss a situation where there is a sale of inventory or transfer of inventory from parent to subsidiary, the subsidiary not having yet sold the inventory. So in that sense, we have an intercompany type of transfer. When we consider the parent and subsidiary as a whole with regard to a consolidation process, the parent sold to the subsidiary the inventory, the subsidiary still holding on to that inventory has not resold it externally at this point, get ready to account with advanced financial accounting. What we want to do now is think about the transaction on p side and then on SSIS, and then what the elimination entry will be. So there’s a couple ways you can think about this, you can kind of memorize what the elimination process will be what the elimination entry will be and put together worksheets to do that elimination process kind of by just routine by just filling out the worksheet. And then you also want to analyze the worksheet and think about it in detail in terms of what is actually happening.

So we’ll do that here. This is going to be the distilled type of transaction if there’s a sale from P to s, and then S has not yet sold it yet. So when we do a consolidation process, how would we eliminate this? Well, instead of eliminating all the transactions for P and S, the full transactions reversing them, we could distill it down to in essence, this item here. Now notice the key point here is that as has not yet resold it, so it’s still reflected in the ending inventory on SS books. So we can reverse revenue by debiting revenue that would decrease the revenue cost of goods sold, we can credit cost of goods sold that would decrease cost of goods sold and then inventory for the gross gross profit, not realized this is going to be the distilled down journal entry. Let’s analyze this now in terms of what would happen on these books, what would happen on SS books and then what that kind of elimination journal entry would look like to remove them.

So on Pease books, then if we have if we were going to record both the sides as if they’re the same company, which is kind of like what we would do in a consolidation process. Then we can think about, okay, what would happen if we basically sold the equipment to ourselves and then had not yet resold it at the end of the year? What would the elimination journal entry need to be in its most Distilled or shortest form? So we’d have Okay, what if p sold to s, that would mean we’re going to make the sales price $400. So debit cash 400, then we’re going to credit sales or revenue 400, then the cost of goods sold, we’re going to say is 250. And the inventory then would go down by 250. Recording that out, if we were to see that here, we’re going to sell right? Well, that would mean that cash would go up, we’re going to say by 400, the inventory would go down by the 250, the sales would go up by 400. And the cost of goods sold would go up by 250. Bringing the net income to a net of 150 to 400 minus the 250 cost of goods sold this being revenue, not a loss credits, maybe the 400 credit minus the debit of the 250 then S would be recording and we’re going to record this on the same day. have books as if you know we are P and S, we’re going to record this to ourselves, in essence, would then say okay, well now as put the items on the books for 400. So if you net this out, then between the inventory, you’ve got the 250. And the 400, nets out to that 150 that it’s on the books for. So in essence, nothing really happened, it just went from one place to the other, yet it went up. So now it’s basically overstated by that 150. And then the other side would be cash, which means cash would go back down to zero, so no net effect on cash then. So let’s break this transaction down. This is going to be our beginning numbers. These are our entries before the elimination entry, not including this and this is going to be basically our elimination entry. So before the elimination if we if we take a look at these numbers here, we’re saying that we posted the activity from here to here for P and S before this elimination entry. What then happens? Well, we saw that the cash the Nets itself out cash nets out. So cash isn’t a problem, because it got recorded on both sides of the transaction. We see that inventory nets out but not entirely right. So we’ve got the inventory went down by the 250, and then back up by 400. So now the inventory is overstated by 150. It’s overstated by the 150. And then we have the sales that are on the books that on because p recorded the sale here, and s hasn’t yet recorded the sale because they haven’t yet sold it yet. Therefore, the sales are overstated by 400. Because it was a sale to ourselves overstated by the 400. The cost of goods sold being recorded once again by P on that sale has not yet been sold again by s therefore, the cost of goods sold overstated by the 250.

So then what do we have to do to eliminate that then we just need to eliminate these items. Right, this shouldn’t have happened, this whole transaction shouldn’t have happened rather than eliminating this entire thing reversing you know, these three basically components for journal entries are two journal entries, we wish we could just eliminate, then this transaction. So that’s going to be the transaction that we saw the original transaction that we saw that we can distill this thing down to basically removing the sales. So the sales is going to be removing for that original sale amount, then the cost of goods sold for that cost of goods sold amount, and then we’ve got the inventory, the inventory for the net of the 400 minus the 250. Or you can think of it as the gross profit because we sold it for the 400 minus the 250, or the gross profit of the 150. Putting that back in place, then you’ll see that if we record that on this side, that’ll then remove the 150 for the Elimination entry, remove the 400 remove the cost of goods sold to bring us back to our original numbers, which is where we should be if there was a sale from P. S and S is still holding on to it because there hasn’t been any actual realized That would be an arm’s length transaction to someone outside of the organization.