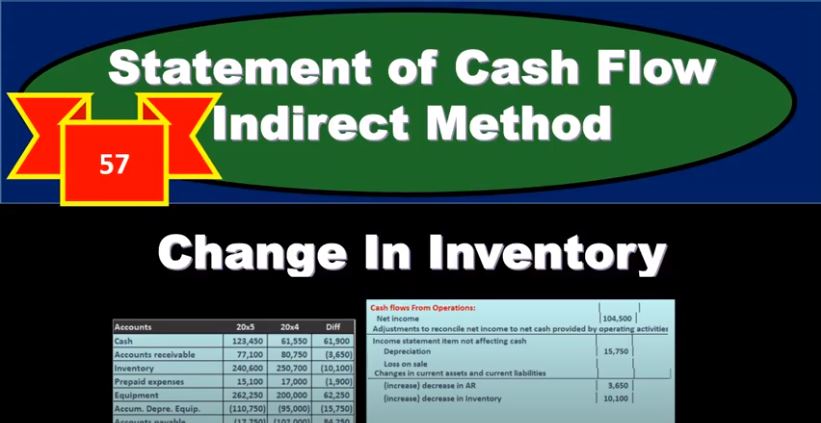 In this presentation, we will continue putting together our statement of cash flows using the indirect method. Now taking a look at the change in inventory, we’re going to be using our materials here with a comparative balance sheet, the income statement and some added information, working primarily at this time from a worksheet that was made from the comparative balance sheet. So here is our worksheet. Here’s what we have. So far, we basically have a comparative balance sheet in a trial balance type format, where we have the current year, the prior year, and then the difference. Our goal is to find a home for all of these differences are in number that we’re looking for, is basically the 61 900 change in cash. So we’ve gone through this, from top to bottom, we’re working through basically the operating cash flows from operating First, the indirect method. So we started off with the net income, then we made our adjustments. And then now we’re going through basically The accounts receivable to inventory. Now once we get into the current assets, we’re going to group those into this change in current assets under the cash flows from operations. Once we know the theme here on what’s going to happen with these current assets, it’s it’s always going to be the same.

But we kind of we want to remember and remind ourself the theory of what’s happening here, because this can be a little bit abstract in that we’re looking for cash flows. And we’re taking the change, for example in inventory here to find that and you might think, well, how does that work? Cash Flows is a timing thing, we’re looking at a change in two points in time to balance sheet accounts. Well, and that of course, means that these two points in times the difference between them is going to be the activity that’s happening. So we’re kind of backing into this change. Now, we’re not going to go through the reasoning that we did with the accounts receivable I would recommend to think through the idea of accounts receivable and apply that same that same strategy to all other current assets. So my thought process I recommend doing is saying accounts receivable, we figured out this to be the case for current assets that will be listed here in operating cash flow from operating Asians. And that will be that the increase will be actually if there’s an increase here, that’s going to be a decrease for the statement of cash flows. That’s what the brackets represent. And then if there’s a decrease in the actual current assets, that’s going to represent an increase in the cash flows. That’s what this little cheat sheet represents. Once we know that, we can just apply that to all current assets, we could say, well, it’s going to be the same for inventory. So if there is a decreased and we’re going to have it an increase here, if there’s an increase, it’s going to decrease over here.

So what happened? It went from 250,700 to 240,600. And so there it went down, we have a decrease. So we’re actually increasing over Here, that’s going to be our custom to doing so. Now how do we know that the difference in the inventory is going to be in the statement of cash flows from operations rather than investing and financing? One we know it’s just because it’s a current. It’s a current asset. And in this section says the changes in current assets will go here. You also could think about what the journal entry related to inventory, we could purchase inventory where we debit inventory and credit accounts payable or cash. And we can sell the inventory, which means that we’re going to have cost of goods sold and expense account. And that because of that expense account, because it’s related to the income statement can tell us that this is going to be dealing with the operating activities, we’re really trying to back into, in a way, the cash component of the expense information that’s happening here on the income statement. So we’re really so that’s why it’s going to be an operating activity if you think through the journal entries and say okay, there’s a major Part of this that deals with an income statement account cost of goods sold in this case, then it’s probably going to be on the operating activities.

That’s why we have to take it out of the net income on the cash flow. And over here if this happened more, so if the GL happened to be the case where it went down, the accounts receivable current asset went down, then that would mean that we received cash on something that doesn’t involve the income statement, something that was recorded in sales last time period. But here we want to record the sale when cash is received. We want to we want to include it when cash is received. And that’s why we have to if the account receivable goes down, then we have to increase the net income on the cash flow statement. And that’s going to be the same for you could think that Do the same type of thing with inventory gets a little bit more confusing, because you got the the purchase of inventory in accounts payable, possibly and selling it at a later time. That’s why I recommend thinking it through with accounts receivable and applying this same model to the rest of to the rest of the current asset accounts. When we get to the liabilities, we’ll talk about accounts payable, but we could just reverse this meaning if there’s an increase in the liability, it’s going to decrease. If there’s an increase in liability, it’s going to increase the cash flow and if there’s a decrease in a liability, it’s going to decrease the cash flow. And then we’ll think through that however, as well with the accounts payable