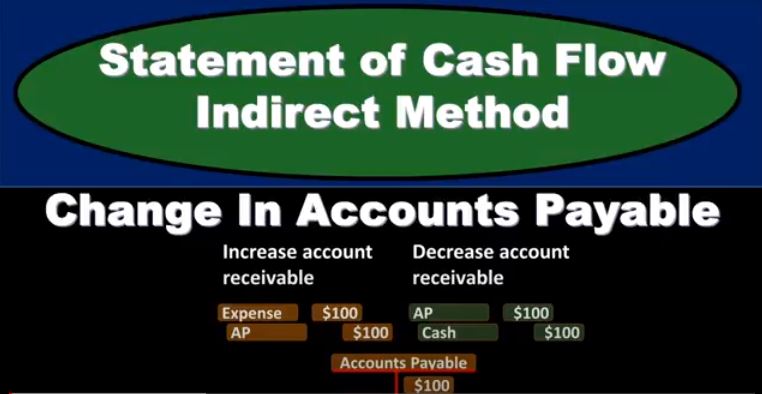 In this presentation, we will continue on with our statement of cash flows using the indirect method looking in on the change in accounts payable, we’re going to be using this information or a comparative balance sheet income statement and other information focusing primarily on comparative balance sheet creating a worksheet with it, looking like this. This basically being the comparative balance sheet. But in a post closing trial balance format, we have our two periods and the difference between those periods here. Our goal is to find a home for all of these differences. Once we do so we’ll end up with basically the change in cash. That being our bottom line that we’re looking for. We’ve gone through this information in terms of the cash flows from operations. We’re currently looking through the current assets, and now we’re moving on to the current liabilities. So we’ve looked at the accounts receivable, the inventory, prepaid expenses, we have these here. We’re moving on now to a liability and notice when we do that, when we’re working From the worksheet, we’re kind of skipping over some things here.

And there’s two ways we can do this worksheet, we could go through one by one line by line, and try to figure out which where each of these lines go, whether it be cash flow from operating, investing or financing, or we can kind of skip and what this would probably is done more often. And we can do the cash flows from operating first, because that’s primarily where we look at. So you know, that’s, that’s where most of the activity is going to be on and work from top to bottom on the cash flow statement. So when we go through these accounts, we can see okay, cash, well, even though that’s on the top of my worksheet, it’s down here on the cash flow statement. That’s our bottom line. And then we go to accounts receivable, we’re going to move to accounts, the current assets, and then the current liabilities. So accounts receivable is current, we worked with that inventories current we’ve worked with that prepaid expenses current, we worked with that, and then equipment, not current. That’s something that’s not a current asset or liability. So what we do that is we could just say This specifically says current assets and liabilities. So it’s not going to go here. Or we can think through it and say, well, equipment. When I buy equipment or sell equipment, typically I debit cash. I mean, I debit equipment and credit cash or loan doesn’t have anything to do with the income statement, therefore not part of the cash flows from operating.

Typically, when we sell the equipment, then we typically get cash and credit equipment. We might have a game but really the principal part of it isn’t part of the income statement either. So equipment doesn’t really belong on the statement of operations of the cash flows from operations that’s going to go in investing activities. And then if we go down to the accumulated depreciation, same thing, we actually already did that we dealt with that in depreciation, that difference is within depreciation. And then we’ve got the accounts payable, and that’s a current liability, which it lists right here that we’re going to look at changes in current assets and current liabilities. So we’re here like At this change in accounts payable then now we already did all these current assets. And we noted this kind of terminology, we figured out what happened with with accounts receivable. We noted that when there’s an increase over here, it’s going to decrease over here. And when there’s a decrease over here, it’s going to increase over here for current assets. Now we’re going to liabilities and we could say, well, it’s gonna be the opposite meaning. Here’s our here’s our terminology. Now, if it increases on our worksheet, it’s going to decrease on our cash flow statement is going to reduce net income.

So again, we could just figure out accounts receivable, the logic of it, and once we have that, apply that same logic to all other current assets and just reverse it, same logic being would indicate this reversal on the liabilities, that being the opposite, then but then we want to think through this it’s also useful to think through it in terms of accounts payable. So I would think through these in terms of accounts receivable and accounts payable as to why we’re increasing decrease in these changes. So for example here, and in the prior period, we had 102,000, in accounts payable went down to 17,007 50 decrease of 84 to 50. That decrease, that decrease is going to decrease the the net income on the cash flow statement. Whereas if we were talking about a decrease in a current asset, they would increase. So let’s think about that. And so we’re basically looking at when there’s going to be an increase and when there’s going to be a decrease the two types of transactions for accounts payable. So when does accounts payable go up? Typically, let’s think about an expense. We’re not going to think about inventory because that’s kind of muddy the waters a bit. So let’s just simplify this process and say that we we had an expense on account. So we’re going to credit the accounts payable, something we owe in the future and we’re going to credit the expense.

And we know that the expense then is going to be an income statement account. And that’s why we’re dealing with the income status. So this will simplify the process. If we go through through inventory, of course, then we it’ll, we’ll get to the same result. But it’ll be a bit longer of a step to go through. This will be a nice easy two step, just as we did with the accounts receivable. So if we go to our T account, then of course, accounts payables going up with a credit, so it’s increasing with a credit. When does accounts payable go down? Well, it goes down when we pay cash, and we debit the accounts payable. So these are the two things that are happening, they’re happening a lot. So if we looked at the the GL, there’d be a lot of activity, but what we’re looking for in total is what’s happening in total. And so if accounts if accounts payable goes up, that means that this is happening more than this. So in essence, this happened more often. So we can think about like in total, this is kind of what happened more often. If accounts payable increased, meaning that the credit balance is winning, it went up in the credit direction increased. Well, if that’s the case, then had recorded these expenses, which decreases net income for which cash was not yet paid.

And so on on a cash basis, we shouldn’t have done that, right, we have to reverse that. So we have a decrease in the net income that shouldn’t be there. And we need to then increase it back, put it back in there. So that is why when there’s an increase in accounts payable, and we’re going to apply the same logic to any liability, then we’re going to increase it on the cash flow, because we’ve got to add it back in there. Because what happened is we had this expense that brought it down, which wasn’t cash related, therefore, we have to add it back. If on the other hand, if we look at all the transactions in this activity, and we know that accounts payable went down, then in total, this transaction happened more than this one. So more, more happen more of this one, so we can pick an aggregate. Basically, if this happened, and what happened over here will we decrease cash, we paid cash cash went out, that’s going to be part of our cash flow. And the other side of being accounts payable, it’s not an expense. We’re not recording the net income at this point in time, even though the cash flow went out. So if accounts payable went down, we’ve got it, we’ve got to record this cash flow that went that went down. That’s why when cash flow goes down, we are going to when accounts payable goes down, we are going to record a decrease in the cash flow statement.

You can also think of it of course that we’re paying cash here. When did we record the expense, probably last year last time period, we recorded the expense at the point in time that we that we incurred it. So we incurred the expense and put it into accounts payable here. And now we’re taking it out. But under a cash basis, we should be recording that expense at the point in time cash was spent, and it’s not happening on this transaction. That’s why we’re going to have to decrease the cash flow when the accounts payable goes down. So once we go through this logic, then we can apply this logic to any liability, just as we did with the accounts receivable. And even it might be easiest to think about the accounts receivable to because revenue makes net income goes up, it’s a little bit easier to think about, oftentimes to go through accounts receivable. Also, you won’t be thinking about things like inventory, when you think about revenue, and then just apply the reverse to any types of liabilities. But just from a theory standpoint, it’s useful to think about both of them, it’s useful to think through the accounts payable, what’s happening here, why are we doing this to the net income. So once you have that, once we’ve thought through that, then we can just write this down and have a little cheat sheet and say, Well, if there’s an increase in our worksheet on a liability, then we are going to increase our cash flow. If there’s a decrease on our worksheet, then we’re going to decrease the cash flow here. Once we have all this set up, then that’s our that’s going to be our goal.

Last current portion. So we’re then going to sum these items up. And when we sum them up, it’s common to not pick all these up. Remember, we’re going all the way back up to the top here. So we’re picking up a net income, the depreciation, and then the account receivable inventory prepaid expense accounts payable to get to this 51 650, we brought it to the inner column, and then summing this up to the outer column. These don’t represent debits and credits. This represents a summing of, you know, just a subtotal in the inner column of the cash flows from operations that we then break out and we’re going to call it net cash flows from operating activities. Now this one is usually cash flows from but just note the terminology if we if cash flow went down, we’d have to say used in or something like that to indicate in words the decrease. So whenever we do these cash flows, we’d have to we have to be a little bit more careful in terms of, of the terminology, as well when we finalize this. This is Basically just more of a worksheet to get the numbers, the numbers worked out. Also note that we still have to make adjustments to net income, depreciation and loss. So we’re not done, but we’re going to, we’re going to find a home for all of these numbers and then we’re going to go back and make those adjustments