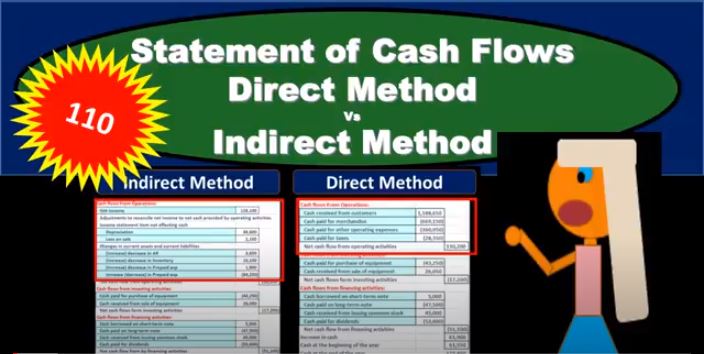 If we were to convert that to something that would be on a cash basis, that would be similar to something that would be on the cash flow statement just for the operating activities. So there are other now the operating activities is usually the longest part of the statement, because when we tell the story of what’s happening within a company, whether that be through activities in terms of income statement, what’s happening in terms of normal operations, or through a cash flow statement, what’s happening through cash flow, we typically are most of the transaction thing, most of the detail most of the story is going to be in the operating activities section. So this is usually the largest section in other words, but there are other things here the investing and financing where we could have cash flows that are not part of the of the kind of the income statement section, the normal operating type of activities section. So we’re going to compare and contrast is now The direct method then makes more sense to us, or at least intuitively, it makes more sense because that would be similar to us going through the income statement, line by line, and just fixing it so that like sales or revenue would be reported on a cash flow basis, rather than on a revenue recognition basis from from a cash basis rather than accrual basis. That makes sense.

However, note that we’ve already calculated net income on a on an accrual basis. And so in a sense, it’s easier for us and it might make more sense in terms of just tying out the to seeing the difference to start with net income, and then reverse the things that are not related to cash. And that’s the indirect method. So oftentimes, we will often use actually the indirect method, the less intuitive method for a few different reasons. One, it could be required, it’s often required to have the indirect method and to Which is probably the reason why we required to have an indirect method. Because you might think why would we want that method when the other method seems more straightforward if I was to explain to someone how this works, if I looked at the indirect versus the direct method, I think it would be easier to look at the direct method here to say, Hey, we’re trying to explain to an investor, this is the cash flow from operations. This is similar to the income statement, we’re going to take cash received from customers, cash paid for merchandise, cash paid for other operating expenses, cash paid for taxes. And you can see that these kind of lists out and line up in a similar fashion, as you might see on an income statement. This is the direct method, the method that typically may not be the most used.

And even if we do use the direct method, oftentimes, we’re still required to have an indirect method calculation. And the indirect method is more difficult to explain to most people typically because it starts with net income and then we kind of Back out these changes, which makes sense. But it’s a little confusing to think about these changes. And we’ll get into a lot more detail on why this works and how these changes are going to be adjusted. The bottom line, of course, will remain the same. So we end up in the same total, it’s just the different approaches that we’re going to get to get to that total. Now, why would we do this? I mean, this makes more sense, just intuitively, why would we require if someone did the direct method to then do the indirect method as well? Well, it might be useful for us to see this reconciliation because we’d want to know what what is the difference between net income and the cash flow from operations, we want to know those reconciling items. So when we do the direct method, it’s nice because we’ve reconstructed everything line by line and we can kind of compare line by line, the the income statement versus the cash flow statement in terms of the operating activities, but this method, the indirect method gives us kind of the exact difference that changes the record. separation between net income on an accrual basis and the cash flow from operations, which is kind of like net income from a cash flow basis.

So for this reason, typically, in order to if we’re trying to not do as little work as possible, right not have the two statements, then a lot of times we’ll see the indirect method and not have the direct method. So a lot of textbooks will focus. And a lot of companies and will focus oftentimes on the indirect method a lot, because it’s typically going to be the required method, and therefore the method that will be used and the method that gets a lot of information for us. So remember that the direct method is going to is going to basically read line out everything. So we’re going to say the income statement starts with revenue, we’re now going to say it’s going to be cash received from customers. And therefore the difference between those two we’ll have to look at the end. We’ll talk more about this when we do the direct method, but we’ll have to look at the revenue account and decide which what’s a cash revenue basis what would be recorded as revenue, if we were on a Cash Flow basis, rather than an accrual basis. And we’ll do the same for other components of the statement of cash flow of the of the income statement. And then in the indirect method, we’re going to go over here and start with net income, the bottom line on the income statement, and then we’re going to reverse things out that are not cash related. For example, depreciation, a gain or loss are not cash related.

We’ll talk more about that when we construct the indirect method, cash flow statement. And then we’ve got the differences from accounts receivable, inventory, prepaid expenses, and we’ll talk more about where these differences come from, why are these not cash related? And to do that, we’re gonna have to look we’re gonna have to think about these accounts and say, how do they go up or down, and then reverse these out. Now, doing this is going to be really helpful to us to just understand normal accrual accounting, if you can understand, you know, the cash flow statement and make one, then you’re really kind of reconstructing the accrual basis and thinking about the accrual basis versus the cash basis. So even if you don’t plan on making a lot of cash flow statements, the practice of doing so really helps for us to understand, you know, different accounts, what different accounts are doing and the difference between a cash basis and accrual basis.