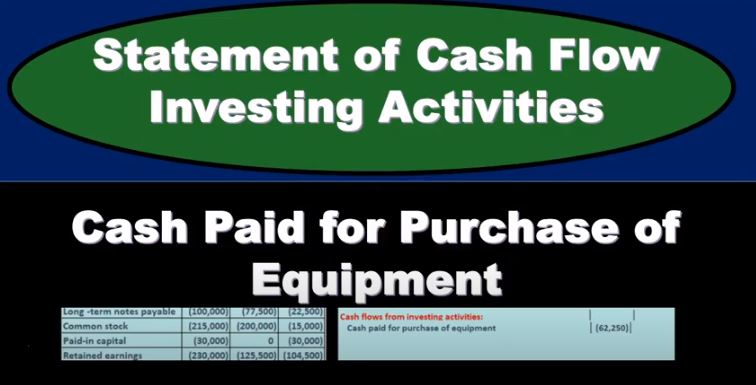 In this presentation, we will continue on with our statement of cash flows. Taking a look at the investing activities, specifically the purchase of equipment, we’re going to be using the comparative balance sheet, the income statement and additional information focusing here on the comparative balance sheet, which we use to make this worksheet. So this worksheet is our comparative balance sheet. We’ve been going through this worksheet and really looking for the differences. We’re finding a home for all the differences. Once we do that, we’re feeling pretty good. We have done this all the way through the operating activities. So are the cash flows from operations. So we’ve gone through here we’ve kind of picked and choose the items that are going to be cash flows from operations, which is probably the way most people approach this. But just note that as we’ve done that, we’ve tried to pick up the exact differences here. We haven’t gone to the income statement and thought about it separately outside of this worksheet, and then we’re going to go back and make adjustments. So we found a home for the difference in cash because that’s Kind of like our bottom line. And then we’ve got accounts receivable, inventory prepaid expenses, and then we skipped equipment and went down to accounts payable.

To continue with the current portions here, or the current assets and current liabilities. Now we’re going to jump back to the equipment, and we’re going to add the equipment to where it should go, which will be the investing activities. And that’s usually the first question people have. But when they go through this, they’re going to say, Well, you know, why does the equipment go to invest in activities? What How do I know that that doesn’t? That doesn’t seem intuitive to a lot of people. And one reason it doesn’t seem intuitive is because, you know, equipment. When I think of investments, I typically think of investing in stocks and bonds, not so much invested in any thing else, but anything is an investment. If it’s an asset. If it’s on the books as an asset, we can kind of think of it as an investment equipment being long term. We’re not going to use it for a while. Therefore, it’s going to be a type of investment. You can always think of journal entries and say well Are any of the journal entries related to income statement accounts because remember that this the cash flows from operations is really kind of a kind of like an income statement that we’re making on a cash flow basis.

So we’re trying to conform in the indirect method, net income to cash flow from operations. So net income, kinda like net income on a cash basis. And so if we think about this, then we’re trying to say, Well, is there anything involved with equipment related to the income statement? If not, then it probably doesn’t belong in the cash flow from operations. And the two journal entries we dip typically how frequent are when we purchase the equipment and then we sell the equipment so when we purchase the equipment, we debit equipment, and then we credit cash or loan or loan and there’s nothing involved with income statement cash is a balance sheet account equipments, a balance sheet account, the loan would be a balance sheet account, so nothing is going to be involved there on the income statement. So that wouldn’t indicate that would not be on the Operations Section. But some Or else either investing or financing. If when we sell the equipment, then we’re going to debit cash, we’re going to credit equipment. And we’ll have to deal with accumulated depreciation as well.

And it’s the same kind of logic you can think for accounts receivable. Now this is another area where we’re going to say well, that might not be the full number here because when we purchase these equipment, we may have purchased it on account I mean, we may have financed part of it. And so and we may have more than one purchase that happened in the purchase can be messy, meaning we may not just have bought it with cash, we may have bought it and financed it. We may have more than one One purchase. Now luckily, the equipment account, typically, we don’t buy a lot of equipment, it’s not like something that’s going to happen every day. It’s not like when we look at the geo, the general ledger for cash, where it would just be a huge general ledger, the general ledger, the activity for equipment should be fairly small. And so we should be able to go through each purchase of equipment and say, Okay, what happened here and try to figure out how much of it we financed and what to do with that. And and also, did we sell any equipment. If we look at our other resources up here, we’ll see that our cash received we have some stuff related to equipment, I believe purchased equipment here, and then we have a loan. So we have some things dealing with equipment. So in practice, obviously, if it’s a book problem, we’d have that information in practice, we would probably automatically go through the equipment account and look at it and pull the documents for equipment, look at the journal entries for equipment say okay, what happened to it and it’s probably more complicated than one purchase of equipment for 62,002 50 cash, so we’ve probably financed it.

And it’s probably more than one purchase. However, what I don’t want to do is start breaking this number out, because it’s going to get very complicated it’s going to get it could fix our depreciation problem, which that didn’t tie out. That’s probably part of this either disposals that we had in the equipment, and there could be something dealing with loans, which is probably going to be down here in the financing area, which we don’t even have yet. I don’t have anything in financing yet. I haven’t looked at the loans yet. So at this point in time, I don’t want to start breaking those things out. And I certainly don’t want to, you know, start taking numbers that are not on this statement on differences. I don’t want to look at numbers that aren’t part of this difference and start adding them over here. like going to the geo and looking at the actual cash that was paid. Put that number here without not without tying out to this difference.

Why? Because we’ll never get to reconciling that way, we’re never gonna, we’re never going to have a process to reconcile, what we can do is say, Hey, I recognize that that’s probably way too simple. But I’m going to use this number. Now, I’m going to get to this number very easily, by not breaking out these numbers into their components, but just using them knowing that they’re not totally right in all areas, then we’ll make a worksheet to fix them in a systematic way. So that we can be in balance and actually have the thing work as we go through it. So note here that this is an imperfect system now that we’re going to revisit as we adjust it.  As we first go through the preliminary adjustments. We’re just going to say equipments The difference here, it’s the difference. This happened to be an increase. So we’re going to assume that we paid cash for that increase. If it was a decrease, then we would assume we sold the equipment, and we’re going to recognize it in either one. It’s probably more messy than that. But I don’t want to deal with the mess now. Because I don’t have all the tools like the other accounts here yet to to mess with that and still reconcile to that difference. We will do so once we have reconciled to the 61 900 and go back and then fix this information.